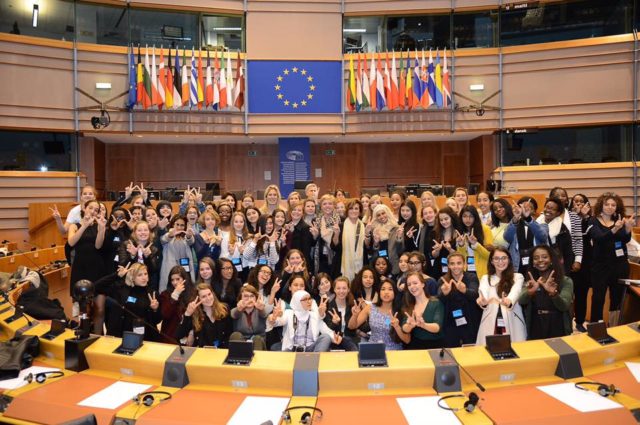 On 6 November 2015, Empower Peace, a US-based international non-for-profit organisation dedicated to bridging cultural and communication divides between young people worldwide, in partnership with the Women in Parliaments Global Forum (WIP), brought 75 young women to the European Parliament. The event was hosted by the Member of the European Parliament, Hilde Vautmans.

The Women2Women Leadership Programme is an educational training program of Empower Peace. It is designed to provide young female leaders with enhanced leadership skills, while challenging them to develop and implement a collaborative civic engagement action plan in their communities. 75 promising young women, coming from different communities throughout Belgium and from a variety of ethnic, religious and economic background, took part in a panel discussion in the European Parliament. The panel discussion ‘’Women in Government – Leadership in Action’’ aimed at highlighting core themes such as women’s empowerment, the importance of gender balanced leadership and social entrepreneurism.

The meeting was moderated by Ms. Vautmans, who shared her own experiences in the political field along with the other distinguished panellists. In her capacity as a European official of the European Parliament since 1979, Ms. Ratti addressed the challenges that she has faced as a woman in her career. Ms. Turan emphasized the importance of networking and self-confidence as key skills for all women in politics. Finally, Ms. Koch-Mehrin discussed the impact of women in government and the importance of women in leadership positions. The stimulating discussion was followed by an interactive Q&A session where the young female delegates showed concern towards gender inequality and asked for advice for women wishing to pursue a career in public service. The young women displayed commitment and passion towards women’s equal participation and representation. This opportunity allowed them to be inspired by female political leaders and to ask advice on how to become involved in political life in the future.