Laura Liswood, New Member of the WIP Advisory Board 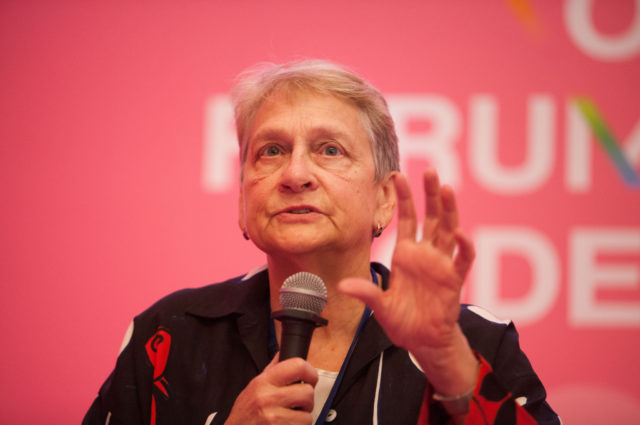 The Women in Parliaments Global Forum (WIP) is happy to announce that Laura Liswood, Secretary General of the Council of Women World Leaders, has joined the WIP Advisory Board.

Laura Liswood is the Secretary General of the Council of Women World Leaders. The Council members include women presidents and prime ministers such as the former President of Nicaragua, Violeta Barrios de Chamorro; the former Prime Minister of New Zealand, Helen Clark; and the former President of the Philippines, Corazon Aquino. . Laura Liswood actively works with the Council to promote governance and gender equality, and enhance the experience of democracy globally by increasing the number, effectiveness, and visibility of women who lead their countries.

In 2001, Laura Liswood was named Managing Director, Global Leadership and Diversity for Goldman Sachs. She has been serving as a Senior Advisor to the firm since 2002, working on issues such as globalization and workforce diversity.

During her long-standing professional career, Laura Liswood has also held the position of CEO/President of the American Society for Training and Development. She has held management positions in the airline industry, and was a consultant for the Boston Consulting Group. She has also worked in executive-level consulting to Fortune 500 and various international companies.

Laura Liswood also held the title of the commissioner of the City of Seattle Women’s Commission, and was the owner/publisher of Seattle Woman. In 2000, the U.S. Secretary of Defense appointed her to a three-year term of the Defense Advisory Committee on Women in the Services (DACOWITS). After the events of September 11, 2001, Liswood became a reserve police officer in Washington DC and retired after 13 years in law enforcement with the rank of sergeant.

In addition to her professional experience, Laura Liswood is also an accomplished author. Her published works include a book chronicling the interviews she conducted with 15 current and former women presidents and prime ministers, called Women World Leaders.

The WIP Advisory Board includes outstanding political leaders and high-level representatives of civil society, the private sector, intergovernmental organizations and academia. They have endorsed the WIP Mission Statement by becoming Members of the Advisory Board; they continue to oversee and provide guidance for all WIP initiatives.