At a crossroads: why are we at risk of losing progress for gender equality? 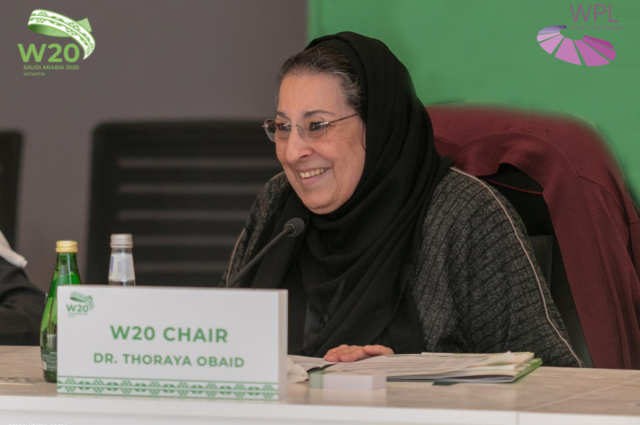 WPL and Women20, the official G20 engagement group aimed at advancing women’s economic empowerment as part of the G20 process, have partnered to establish a series of Webinars with eminent international political leaders who advocate for inclusive decision-making processes. This virtual collective seeks to provide recommendations that ensure accountability and will help deliver on the promise of economic equality.

WPL is delighted to welcome Dr. Thoraya Obaid, Chair of the W20 and former Executive Director of the United Nations Population Fund and an Under-Secretary General of the United Nations (2000-2010), as she shares her insights regarding one of the toughest questions women worldwide are facing: are we at risk of losing progress for gender equality?

As the world continues to grapple with the COVID-19 crisis and its ensuing uncertainty, we find ourselves at a pivotal crossroads on the path towards gender parity. The risk of losing past progress toward the realization of the UN Sustainable Development Goals (SDGs), specifically SDG 5 to achieve gender equality and empower all women and girls is a reality. Achieving SDG 5 would not only have a positive impact on women, but also on households, communities and countries as they move from recovery to development.

While it is important to acknowledge that the women’s empowerment agenda is at risk, we must also understand why. Why is it that women could lose past progress towards gender parity? And why is it that momentum could come to a halt?

There are many factors with the potential to halt or undo progress towards SDG 5 in the face of this crisis—an increased care burden, job loss, lack of protection in the informal economy, to name a few. However, the greatest risk and the issue that ties all these factors together is the under-representation of women in decision making at the household, local, national, and international level. This continued disparity serves as a fundamental reminder that the gender lens is not integrated into the decision-making processes at all levels.

We know that all policy decisions have gender ramifications and that is why gender mainstreaming must occur at the beginning of the policy making process or we risk maintaining the status quo of exclusive decision making which is only representative of half of the society. Global, national and community policy priorities and the gender agenda are not mutually exclusive. To the contrary, they must work hand in hand for us to emerge from this crisis into a society that is both inclusive and equitable.

The Women 20’s view is that inclusive decision making is the enabling tool through which all other forms of women’s empowerment are sustainably achieved. G20 governments must acknowledge that removing legal barriers that keep women from decision-making roles is only the first step. In 19 out of 20 G20 member states, women have the same rights as men to hold public and political office in their parliaments, public administrations and governments but only represent one fourth of the members. This tells us that true women’s empowerment requires proactive measures that will engage women in decision-making.

Sustainable change for re-building healthy societies with empowered women cannot wait.  COVID-19 has blown out all covers and we cannot hide anymore. It is our responsibility to respond together and right NOW.

WPL and Women20, the official G20 engagement group aimed at advancing women’s economic empowerment as part of the G20 process, have partnered to establish Webinars with eminent international political leaders who advocate for inclusive decision-making processes. This virtual collective seeks to provide recommendations that will help deliver on the promise of economic equality.

—
Dr. Thoraya Obaid
Dr. Thoraya Obaid was the first Arab woman to head a UN agency. She started her career at the United Nations in 1975 in the UN Economic and Social Commission for Western Asia (ESCWA) where she served as head of social affairs until 1993 when she became the deputy executive secretary.
In 2001 she became the Executive Director of the United Nations Population Fund, where she worked for ten years. Dr. Obaid is one of the first  Saudi women who was appointed by King Abdallah bin Abdulaziz in 2013 as a member of the Shura Council (Consultative Council), where she served for three years. In 2013, she was awarded the King Abdulaziz Medal of the First Degree for her international service. She holds a doctorate degree in English Literature and Cultural Anthropology from Wayne State University in Michigan and a B.A. in English Literature and Sociology from Mills College in California. She is a member of several councils, including the National Council for Development Studies and the National Population Committee. She has been a supporting member at Alnahda since 1987 and is currently a member of the board of directors.
share