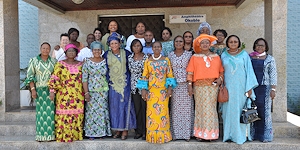 It follows IPU training on advocacy, communication and leadership on women’s rights issues last April for Côte d’Ivoire’s 24 women MPs, two male MPs and parliamentary staff. With so few of them represented in parliament, Ivorian women MPs now intend to set up a caucus to achieve greater solidarity and influence in order to drive through plans that improve women’s lives in the country. Principal goals include increasing women’s political participation, potentially through quotas; educating women about their rights; setting up programmes to combat illiteracy amongst women and getting girls back into education as well as involving women in the national reconciliation and reconstruction process.

In 2011, Côte d’Ivoire elected its first National Assembly in a decade after years of political instability and military conflict. More than 90 per cent of MPs were elected for the first time. Gender equality and women’s rights have been outlined as a key area for improvement by the Ivorian parliament. It has requested further assistance from IPU to implement the action plan, as well as draw up legislation to increase women’s political participation and prevent violence against women, girls and children.