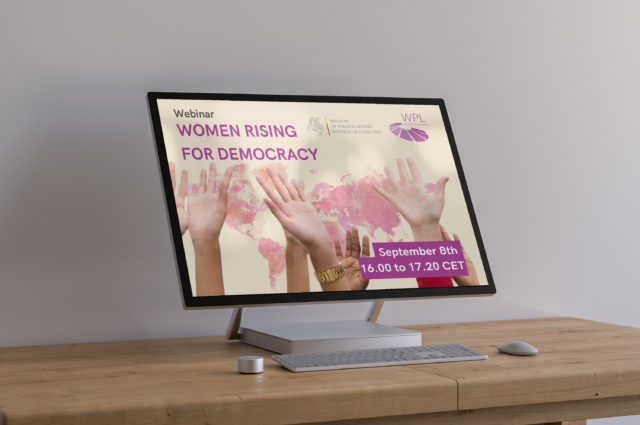 Courage and Solidarity: These are the two fundamental elements in the winning equation of the long-underestimated power of women in politics.

However, the defining factor of women resides not only in their courage, but also in the inclusivity and solidarity that permeates their leadership style.

The sentiment could not have been more timely. The recent events in Belarus have shown, once again, that women are ready to find their space to take a seat at decision-making tables when the need arises. “What is today happening in Belarus allows us to reflect on the role of women in democracy at an international level,” according to Silvana Koch-Mehrin, President and Founder of Women Political Leaders; moderating the discussion.

Svetlana Tikhanovskaya, opposition leader and candidate for the Belarus Presidential Election (2020), introduced the discussion by underlining how the

“Belarus national uprising would have not been possible without women. Women collected signatures, women shared the stage with me.” She highlighted that on August 9th, Belarusian women “won” precisely because “President Lukashenko underestimated the power of women.” “We believe violence cannot be stopped by violence: dialogue is what women can do the best” and it is the ultimate key to the full embracement of democratic ideals. The quintessential features of women in politics – courage and dialogue – are the foundation of the fight for democracy.

Rosalía Arteaga, President of Ecuador (1997) and member of the WPL Board, brought her personal experience to the discussion. She similarly identified the barriers initially hindering her access to the political arena:

“I used to be a teacher, a writer and a journalist and I did not think I could be the president of my country, like Svetalana Tikhanovskaya said. Generals and chiefs of the Army were against me. These were hard times for me and my family, but I had to do it!”

Courage, as in the case of Artaega, is fundamental to emerge in a world dominated by masculine ideals of leadership, but it is not enough. Solidarity needs to be the driving force of women in politics, because, as Michelle Bachelet, former President of Chile said,  “When one woman is a leader, it changes her. When many women are leaders, it changes politics and policies.”

Hafsat Abiola, founder of Kudirat Initiative for Democracy and Nigeria President of Women in Africa (WIA), recalled the concept of solidarity by its all-encompassing nature.

“The women in Africa are ready to rise for solidarity with our sisters in Europe and all over the world.” Solidarity is not only a founding element of women’s fight for equality in political representation, but it is truly what enables women to be great leaders. It is the distinctive feature of female leadership that allows an inclusive, empathic and effective dialogue with society. As Abiola emphasised, “When people lead public spaces, things just don’t work as they should, egos come into play to be able to stay in power and they end up forgetting why they run in the first place. Women never forget: it’s not because women are perfect, but women always remember their children; that women are suffering just like them.”

Given these various experiences, is being a woman an advantage in the political arena? Asked Silvana Koch-Mehrin.

According to Svetlana Tikhanovskaya, it could be an advantage,

“Yes, because the establishment doesn’t think you’ll be elected. […] They thought I’d be a weak candidate, that no one would support me. But people believed in me. Step by step, the authorities changed their opinion.”

The “Women rising for democracy” webinar has been co-hosted by Women Political Leaders (WPL) and the Ministry of Foreign Affairs, Lithuania.