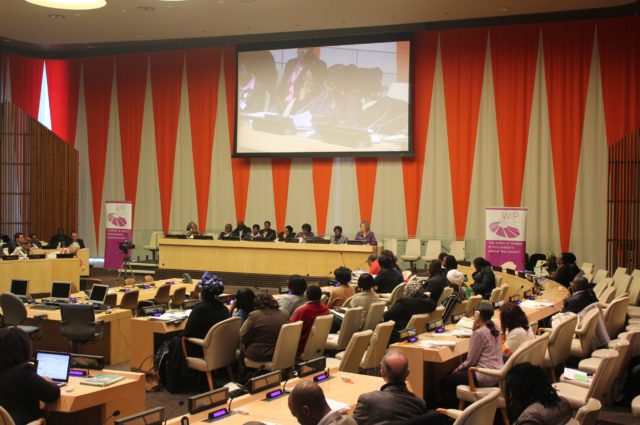 On 9 March, the Women in Parliaments Global Forum (WIP), in partnership with the Government of Nigeria, the United Nations Millennium Campaign and the Pan-African Parliament, co-hosted the Session “The Role of Women Parliamentarians in achieving the Sustainable Development Goals in Africa: Lessons from the MDGs”.

This interesting meeting was held in the framework of the 59th Commission on the Status of Women, which is taking place at United Nations HQ in New York, from 9 to 20 March 2015. The session (UN, ECOSOC Chamber) was a unique opportunity for female MPs to share best practices on the engagement of women parliamentarians with the MDGs; understand the current processes towards a post 2015 framework and engagement opportunities for African women; discuss the strategic roles of women parliamentary leaders in the implementation of the post 2015 agenda; and build a network of women parliamentary leaders to drive the interest of African women and girls in the emerging global agenda.

The main focus of the CSW59 Session is on the Beijing Declaration and Platform for Action, including current challenges that affect its implementation and the achievement of gender equality and the empowerment of women. The Commission will undertake a review of progress made in the implementation of the Beijing Declaration and Platform for Action, 20 years after its adoption at the Fourth World Conference on Women in 1995. The review (Beijing+20) will also include the outcomes of the 23rd special session of the General Assembly, the first five-year assessment conducted after the adoption of the Platform for Action, which highlighted further actions and initiatives.

The session will also address opportunities for achieving gender equality and the empowerment of women in the post-2015 development agenda.