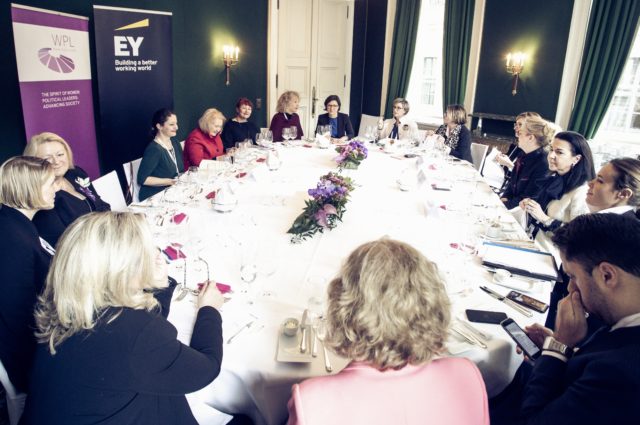 As the leading global forum for defence and security, the Munich Security Conference (MSC) 2020 presented the perfect opportunity for Women Political Leaders (WPL) to demonstrate the vital contribution of female political leaders to this sector, and to highlight the harsh reality that there is still ample work to be done to achieve equal opportunities and participation for women.

During the Munich Security Conference (MSC) 2020, WPL and EY co-hosted a high-level roundtable discussion entitled “Disrupting perceptions for better leadership,” thereby constituting a space for female leaders to exchange their experiences in multiple sectors. This gathering of accomplished women leaders sought to develop an introductory framework for how to move impactfully into the future regarding the participation of women leaders in defence and security in all its facets. It was important to have this particular discussion included, as 2020 marks the 20th anniversary of the adoption of UN Security Council Resolution 1325 (UNSCR 1325).

The gathering began by taking stock of the findings of the 2019 Reykjavik Index for Leadership, a study realised by WPL and Kantar, which illuminates the extent of prejudice toward female leadership.

The remarks of participants revealed insightful ways to effectively move this discussion forward. Among the key takeaways from the roundtable discussion:

Despite any discernible progress that legislation like Resolution 1325 has made, leaders should not operate under the false assumption that the challenges women face as leaders are solved. Quotas and legislation targeting gender inequality in politics often provide the necessary framework to implement existing resolutions and cultivate systemic change. However, accountability measures are still severely lacking from these framework solutions and would help accelerate progress if included.

On one point, the roundtable was particularly adamant: an evidence-based approach, supported by adequate funding and resources, would help avoid repeating the same conversations. To implement a new framework successfully, one which disrupts stereotypes and entrenched norms, research and data need to reflect the reality of women leaders both in developed and developing countries. An accurate view of this problem, which includes key information and statistics about the diverse situations in different countries, would be an essential component of any new action plan, as would the inclusion of women leaders from developing countries in this process.

The final core element, which was continually woven into the conversation, centered around the inclusion and mentorship of young women. How can current leaders translate their roles and experience into useful advice for young women? How can they prepare young women leaders, such as the young women driving the climate movement, to effectively handle the rising violence and vitriolic language used towards them? Facilitating these young women’s transition to leadership roles in all forms is vitally important.

Recommendations on the way forward

What are the next steps? During the roundtable the leaders devised a list of recommendations that includes possible suggestions for governments, civil society actors and international organisations who are committed to improving equality between women and men and increasing the number of women in leadership positions.

What some allies of women leaders fail to understand is that they must incorporate pragmatic everyday actions to realise the outcomes of speculative political discourse. Here are a list of the recommendations that the leaders suggested be taken into consideration:

1) building private and public corporate partnerships that acknowledge the role of women in business and economics, 2) combating entrenched norms and stereotypes through education, gender bias training, etc., 3) developing accountability measures and fulfilling current legal quotas and obligations that will make existing resolutions more impactful 4) providing greater opportunities for women to work in traditionally male-dominated sectors, such as peace and security, and in different capacities (i.e. not just as legislators, but as part of the police force and judiciary for example), 5) collecting and distributing informed data that demonstrates the myriad benefits of having more women in leadership positions as well as the negative effects that occur when women are excluded or experience bias, and 6) providing tailored educational training and support to young women leaders who are facing challenges as they seek to enter male-dominated sectors.

Leaders at the roundtable emphatically agreed that there remains substantial work to be done in terms of challenging and eliminating biases against women and in some cases men, in leadership positions.

The message resulting from the encounter at the WPL-EY roundtable at the Munich Security Conference (MSC) 2020 was clear: change is possible and it should be based on a factual approach that relies on the contribution and joint action of both women and men.

The high level roundtable discussion was chaired by:

Radmila Šekerinska, Deputy Prime Minister and Minister of Defence of the Republic of North Macedonia

The distinguished discussants included women political leaders, as well as women leaders from civil society organisations, the private sector and defence and security:

Jennifer Allen Simons, Founder and President at The Simons Foundation

Hanna Serwaah Tetteh, Special Representative of the Secretary-General to the AU, Minister of Foreign Affairs and Regional Integration to the Republic of Ghana (2013-2017)

Sarah MacIntosh, Permanent Representative of the United Kingdom to NATO

Pictures related to the session are available here.