Power parity: getting to a new normal in political representation 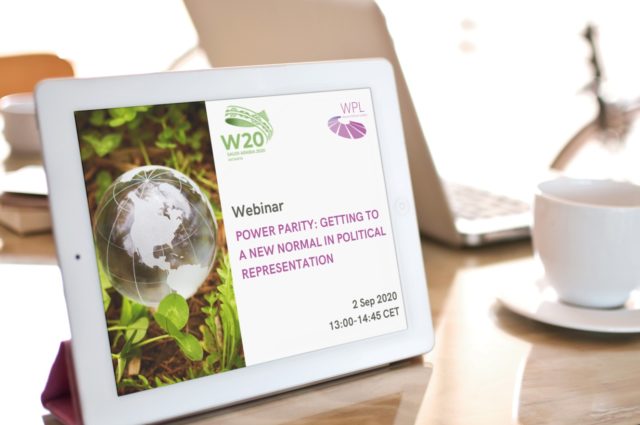 Women Political Leaders (WPL) and Women 20 (W20) are delighted to announce the first Webinar in a short series of virtual gatherings of eminent political and corporate leaders, both women and men, who are strong advocates of inclusive decision-making processes and the economic empowerment of women.

On Wednesday, September 2nd – 13:00-14:45 CET via ZOOM, don’t miss the extraordinary opportunity to hear from high-level speakers, from different regions of the world, about the need to disrupt social narratives and cultivate a “new normal” in which inclusive decision-making processes become the rule for political representation.

The discussion outcomes of this series of Webinars will contribute to the finalisation of the recommendations on Inclusive Decision-Making that W20 will transmit to G20 leaders and decision-makers.

The high-level panel discussion will also highlight the exemplary role female political leaders – as well as female health and social workers – have played during the COVID-19 pandemic and how this can translate to more positive perceptions of women in leadership.

With opening remarks by:

Participants will also be able to submit questions to the panel; a Q&A session will follow the discussion. Register to attend here!

The panel discussion will be moderated by Salma Alrashid, Sherpa and Executive Director, W20, and facilitated by Lucia de Luca, Managing Director, WPL.

About Women 20 (W20)
Women20 (W20) is a transnational recommendation engagement group, aiming at promoting women’s economic empowerment as an integral part of the G20 process. Established during the G20 Turkish presidency in 2015, its primary objective is to ensure that gender considerations are mainstreamed into G20 discussions and translate into the G20 Leaders’ Declaration as policies and commitments that foster gender equality and women’s economic empowerment. In a broad dialogue facilitated by expert meetings and roundtables, W20 formulates actionable policy recommendations to ensure they are mainstreamed into G20 discussions and translated into policy commitments in G20 negotiations.

About Women Political Leaders (WPL)
Women Political Leaders (WPL) is the global network of female politicians. The mission of WPL is to increase both the number and the influence of women in political leadership positions. WPL members are women in political office – Presidents, Prime Ministers, Cabinet Ministers, Members of Parliaments, Mayors. Membership is free and members are honoured by their participation. 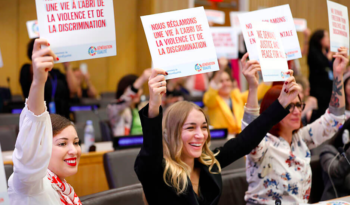 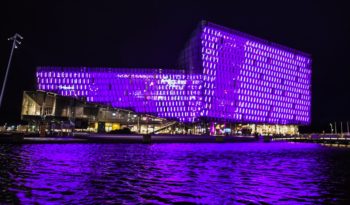