WPL at the 2019 Concordia Annual Summit in New York 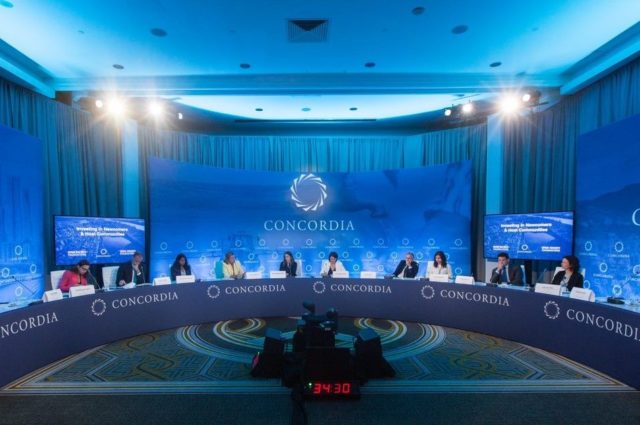 This year again, Women Political Leaders (WPL) continues to contribute as a programming partner at the 2019 Concordia Annual Summit, the largest and most inclusive non-partisan forum happening alongside the 74th UN General Assembly (UNGA), in New York on September 22-24.

Discussions around shared values and goals toward the achievement of equality between women and men in politics will guide this year’s Concordia Annual Summit, to provide a unique platform to reach decision-makers and opinion-formers in the public, private and non-profit sectors, and advance partnership solutions to the world’s most challenging issues.

WPL’s presence at the 2019 Concordia Annual Summit in New York is marked by a series of important gatherings:

Thanks to a well-established partnership with Facebook, WPL co-hosts a tailored social media training for female politicians to gain new insights on how political leaders can use this valuable tool. The training is tailored for politicians already utilising social media in their campaigns and/or to keep in touch with their constituents, as well as for those who are completely new to this platform. The session will take place at the Grand Hyatt on Monday, September 23.

WPL and Concordia, in partnership with the Council of Women World Leaders (CWWL), is co-hosting the second annual Women Lead Reception on Monday, September 23. In line with WPL’s tradition of gathering women leaders from around the world participating in UNGA and surrounding events, this Reception constitue a valuable networking opportunity.  As the number of female government officials and political leaders is slowly growing, it is critical to creating spaces for these women to forge relationships, share ideas, and define a new form of power. The event comprises brief remarks by Kolinda Grabar-Kitarović, President of Croatia (TBC).

The 74th session of the UN General Assembly (UNGA), the world’s most important meeting, will convene high-level discussions including the Climate Action Summit, a one-day UN High-Level Meeting (UN HLM) on Universal Health Coverage, and the SDG Summit.  With the amplified importance of UNGA, this year again Women Political Leaders (WPL) is committed to be present and ensure that the global network of women politicians is given the prospect to be part of these imperative conversations.

On September 25, WPL is organising the ‘When Women Lead’ session at the SDG Action Zone. The session, facilitated by Amanda Ellis, from the Julie Ann Wrigley Global Institute, brings together leaders who have proven to have the ability and responsibility to fight detrimental regulations, policies and discriminatory (yet widely accepted) social behaviours and have pushed to concretely transform societies.