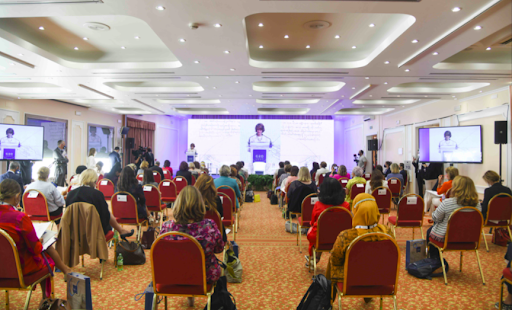 In the lead-up to the G20 Summit in October, the  Ministerial Conference on Women’s Empowerment was the first of its kind in the G20. Organised by the Italian G20 Presidency and held in Santa Margherita Ligure, the conference addressed ongoing disparities in the areas of STEM education, financial and digital literacy, the environment and sustainability, labour and economic empowerment, and work-life balance. By bringing to the table perspectives from its network of women leaders, WPL underlined the urgent need to construct a world in which equality between men and women is embedded into all aspects of leadership and decision-making.

In support of this transformative conference, three members of the WPL community  were invited to contribute, to supply their expertise and recommend policies that advance equality in all sectors. These distinguished invitees were Bogolo Kenewendo, Hanna Birna Kristjánsdóttir, and Nurhayati Assegaf.

Member of Parliament, House of Representatives, Indonesia (2004-2019); President, Geneva Council for International Affairs & Development; WPL Global Ambassador for the SDGs; Member of the WPL Board

“With regards to the G20 main topics – STEM, environment and sustainability, labour and economic empowerment, and work-life balance – WPL would strongly recommend that the G20 outcome document aligns with international cooperation on achieving global goals by 2030, with the main goal of “leave no one behind.” 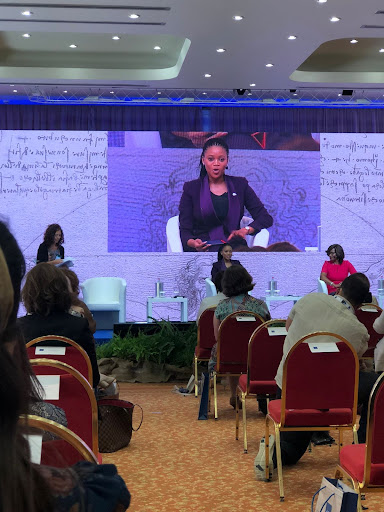 Making reference to the Reykjavík Index for Leadership, Kenewendo credited data that measures popular perceptions, and she addressed the visible gaps between today’s reality and the commitments that governments and institutions have made at all levels. “Certainly we need to deal with perceptions, because more often than not, perceptions translate into and influence policy,” said Kenewendo. 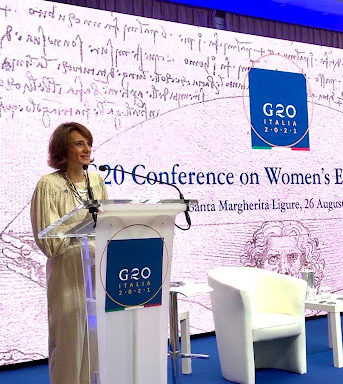 “The education of girls and women, the promotion of women’s leadership, the overcoming of gender stereotypes, and the strengthening of adequate social and educational structures – all of this is necessary to activate a change in speed, and to guarantee the full contribution of women to the progress of human rights as well as global progress.”

Read more about the G20 Ministerial Conference on Women’s Empowerment, including the Chair’s statement, in the official G20 press release here. Media highlights from the conference can be found here.

WPL TV shares the voices of diverse leaders and members of the WPL network, providing its community with a behind-the-scenes look at the conversations and perceptions of the many politicians attending the G20 Women’s Empowerment Conference.

As WPL Special Envoy to the G7 & G20, Bogolo Kenewendo strongly advocated for the crucial issues of empowerment, equity, and equality to be given strong consideration at the upcoming G20 Leaders’ Summit in October.

“The mission has been simple: to share what women can accomplish, and to ensure that women’s issues… are issues that both men and women are aware of.”

As Chair of the Reykjavík Global Forum, Hanna Birna Kristjánsdóttir underlines the significance of parity between women and men, along with making sure that “we are aligned and speak as one voice about the urgent matter of more women in politics.”

“Numbers do matter in leadership. It’s not just because this is the right and just way to do things… that there should be 50/50 at the decision-making table. It’s also about girls – it’s about the pictures we see, and the role models. We’ve often said that “you cannot be it if you cannot see it.” That’s the message we want to make sure is known to women and girls around the world, so that’s why we need to see more women in leadership and power.”

The COVID-19 pandemic has exacerbated already-existing stereotypes that hinder society’s progress toward equality between women and men. Helena Dalli stressed that, unless discriminatory attitudes are eliminated, even the best legislation won’t be able to allow girls and women to reach their full potential.

“In spite of all the legislation and all the policy-making, unless we change attitudes, (…) we will not get anywhere. There is still a lot of discrimination going on in our societies. And when you discriminate, you are not allowing a girl to take the road that she is good for. Also, we invest a lot in women’s education and training, and then we do not get the return that we should be getting – because of these realities in our societies.”

Vice President of the Chamber of Deputies, Italy

To build a post-pandemic world led by the principles of equality and inclusivity, multilateral cooperation is key. Maria Edera Spadoni views communication between governments and leaders as a vital prerequisite for better policy decisions. “If, for example, I talk with another leader from another country, and this leader tells me which are the good practices there, of course I can then translate these practices into my country. I can translate them into laws. “

With the aim of reaching parity between women and men across sectors, Ulrik Vestergaard Knudsen highlighted the importance of including men in all discussions concerning women’s issues. As he put it,

“If we want to tackle some of the root causes of the problems we’re discussing over two days here, we also need to have men become more aware.”