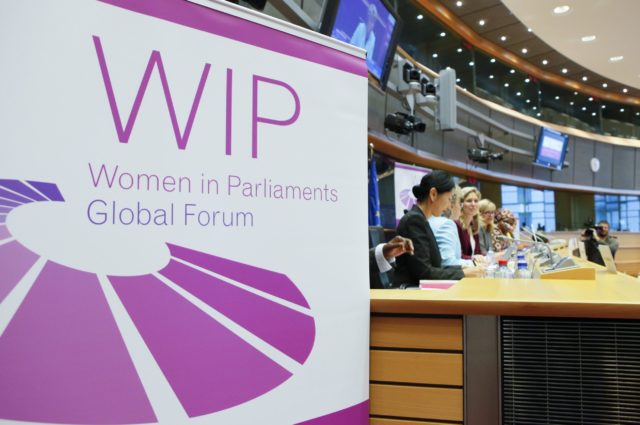 More than 400 female Members of Parliaments and Governments from around 80 countries will participate in the Women in Parliaments Global Forum (WIP) Summit 2016, from 4 to 6 May. The WIP Summit takes place in the Plenary Hall of the Parliament of Jordan. Under the title “Women in Politics: fast forward” the WIP Summit will focus on the importance of parity of power, and address urgent matters such as peace, security, migration and integration. This Summit, co-hosted by WIP and the Parliament of Jordan, and the Organisation for Economic Cooperation and Development (OECD), will be the first of its kind to be held in a country of the Middle East and North Africa (MENA) region.

WIP is honoured to have the Summit convened in the Plenary (Dome) and congratulates Jordan on its commitment to increasing gender equality. Over 80 countries will be represented in the WIP Global Summit 2016. The agenda of the conference includes keynote speeches by Dalia Grybauskaite, President of Lithuania and Chair of the Council of Women World Leaders; Marie Louise Coleiro Preca, President of Malta; and Tawakkol Karman, Nobel Peace Prize Laureate.

“We have a legitimate ambition in our country, for Amman to become the capital of women’s action, as entrepreneurship in this field requires us to take steps forward. If women as half of the society are considered a percentage, we are looking forward for women to become the entire society – in terms of impact and presence. Perhaps women’s parliamentary experience has doubled our steps towards convincing society to change its masculine perception of political positions”. – Atef Tarawneh, Speaker of the House of Representatives of Jordan.

The convening of the WIP Global Summit in Jordan comes in light of the progress on women’s participation in political decision-making across the MENA countries. With a high representation of female Parliamentarians from the region, it presents a unique opportunity for participants to discuss the most pressing issues on the global agenda. The combination of the OECD and WIP’s networks will provide ample opportunity for female leaders from across the globe to network with their counterparts, as well as share best practices and experiences with one another.

“The mission of Women in Parliaments Global Forum (WIP) is to increase the number and influence of female Parliamentarians across the globe. After bringing this forum to different countries and continents to identify and share best practices, WIP is delighted to celebrate its annual summit in the Middle East for the first time. We are honoured and thrilled that so many female leaders coming from different countries and political families will be sharing ideas and strategies to boost women’s participation in politics, regionally and globally”. – Silvana Koch-Mehrin, Founder of WIP.

WIP Certificates of Recognition will be presented at the WIP Global Summit 2016 to those countries, which are recognised for their political empowerment of women, and to countries that show regional leadership in closing the gender gap in politics.

“Given the tremendous gains women have made in education, there remains no defence for women’s under-representation in decision-making. The opportunity costs of not supporting women’s participation are great. The low representation of women in legislatures is particularly problematic because these institutions represent the public they serve and create policies that affect people’s well-being. This is why the OECD pays special attention to the issue of gender equality and access to leadership. In order to enable better lives, policies need to be gender sensitive and encompass the whole of society” – Mari Kiviniemi, Deputy Secretary-General of the OECD.

The conference is further enhanced by collaboration with the Jordanian National Council for Women (JNCW) and the Council of Women World Leaders (CWWL), the network of female Presidents and Prime Ministers. The CWWL will convene some of its members on the occasion of the Summit. International institutions such as UNDP and UN Women will host working group sessions on topics ranging from disaster risk reduction to political violence against women.