Irina Bokova, new Member of the WIP Advisory Board 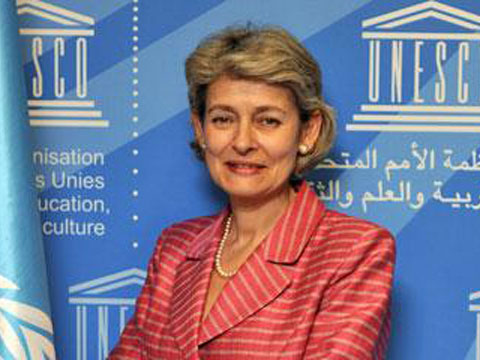 The Women in Parliaments Global Forum (WIP) is glad to announce Irina Bokova, Director-General of UNESCO, as a Member of the WIP Advisory Board.

Irina Bokova is the Director-General of UNESCO since 15 November 2009, and reelected for a second term in 2013. She is the first woman to lead the Organization. As Director-General of UNESCO, Irina Bokova is actively engaged in international efforts to advance quality education for all, gender equality, cultural dialogue and scientific cooperation for sustainable development and is leading UNESCO as a global advocate for safety of journalists and freedom of expression.

Speech by Irina Bokova, Director-General of UNESCO, at the WIP Summit 2015

Irina Bokova joined the United Nations Department at the Ministry of Foreign Affairs of Bulgaria in 1977. Appointed in charge of political and legal affairs at the Permanent Mission of Bulgaria to the United Nations in New York, she was also a member of the Bulgarian Delegation at the United Nations conferences on the equality of women in Copenhagen (1980), Nairobi (1985) and Beijing (1995). As Member of Parliament (1990-1991 and 2001-2005), she participated in the drafting of Bulgaria’s new Constitution, which contributed significantly to the country’s accession to the European Union.

Irina Bokova was Minister for Foreign Affairs, Coordinator of Bulgaria-European Union relations and Ambassador of Bulgaria to France, Monaco and UNESCO and Personal Representative of the President of the Republic of Bulgaria to the “Organisation Internationale de la Francophonie” (OIF). As Secretary of State for European integration and as Foreign Minister, Irina Bokova has always advocated for European integration. Active member of many international experts networks, active in civil society and especially President and founding member of the European Policy Forum, she has worked to overcome European divisions and to foster the values of dialogue, diversity, human dignity and human rights.

The WIP Advisory Board includes outstanding political leaders and influential personalities from civil society, the private sector, intergovernmental organizations and academia have endorsed the WIP Mission Statement by becoming Members of the Advisory Board. They oversee and provide guidance for all the WIP initiatives.