Jóhanna Sigurðardóttir: “Gender equality did not fall into our laps without a struggle” 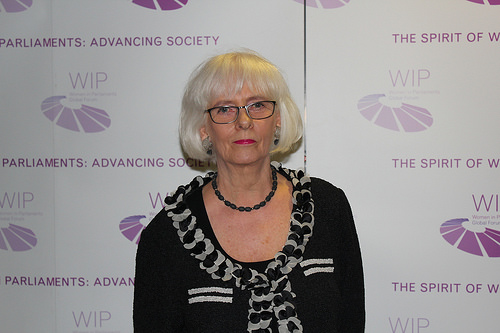 Jóhanna Sigurðardóttir was the first woman to hold the position of Prime Minister of Iceland (2009 – 2013), the leading country in gender equality. During her tenure, the government pushed gender equality to the top of the political agenda, with initiatives such as gender budgeting and a nation-wide ban on strip clubs. Now honourable member of the WIP Advisory Board, Sigurðardóttir shared her insights in a recent interview, captured by the WIP Team, just before the WIP Study Trip to Iceland.

Why would you encourage female MP´s to attend this first WIP Study Trip in Iceland?

I am very pleased that Iceland has been chosen as a destination for the first WIP Study Trip, but perhaps that is no coincidence, because Iceland, along with the other Nordic countries, has led the way in matters of equal rights in various fields.

Neither was it a coincidence that last year Iceland was at the top of the World Economic Forum‘s Gender Gap Index for the fifth consecutive year.  This list is put together by weighing issues like political participation, economic equality and access to education and health care. Therefore, Iceland is an ideal country to visit on a Study Trip about equal rights. But gender equality did not fall into our laps without a struggle and Iceland did not reach this stage overnight. This is something we have worked towards for decades and when we look back we see several milestones along the way.

One of these important turning points was what we call „The Women´s Strike“. That is definitely at the top of the list.  The strike took place in 1975, on the 24th of October, the Day of the United Nations. On that day Icelandic women who had had enough of gender inequality – especially in the labour market – called a general strike that paralyzed the entire country. The purpose of this strike was to put women´s contribution to society in the spotlight and show how undervalued their work was, both inside and outside the home.  Ninety per cent of Icelandic women took part in the strike and refused to work, cook or look after children – and that day our society was almost brought to a standstill. This was the first women´s day off in history and it was a vital event in the fight for equal rights in Iceland. The Women’s Strike is also considered to have paved the way for the election of President Vigdís Finnbogadóttir in 1980, the first woman in the world to be elected President in a democratic election.

Another event that came in the wake of The Women´s Strike was the founding of a new political party in 1983 – a women´s party. This party managed to get some women elected to Parliament, but it was even more important that the party´s influence also reached the old, established political parties. They now had no choice but to heed this development and put more women in the forefront.

These three events were all a turning point for Icelandic women and played an important role in the fight for equal rights in my country, but all societies have something others can learn from. I hope that WIP Study Trips will become an on-going project that will allow women from all over the world to learn from each other’s experiences. I am in no doubt this will pave the way, slowly but surely, towards closing the gender gap on a global level.

Iceland is at the top of the WEF Gender Gap Report year after year. What kinds of policies were needed to tackle gender inequality?

First and foremost, determination and co-operation between women, similar to the forces at work at WIP today. You also need a completely new mind-set and an increased understanding among men. They have to realize that equal rights are not merely a “women’s issue”, they concern each and every family and the whole of society. If a woman is treated badly in some way in the labour market, for example if she is being badly paid, her entire family suffers. If welfare-issues are not high up on the agenda, then it becomes a huge social problem that harms children, the aged, the disabled and, thus, most of society. Often, welfare issues have to be addressed so that both parents can go out to work. Economic equality and a strong welfare-system are the keys to a better society and to equality in all spheres of life, not least to gender equality.

I would also like to mention few things that I consider very important tools to increase women´s participation in top level positions in society, both in the private and the public sector, and I am certain this will be discussed during the Study Trip to Iceland in April.

Firstly, fathers need to take parental leave as well as mothers. When we introduced a law to that effect in Iceland – giving fathers a separate right that could not be transferred to the mother – the percentage of men that took parental leave rose from less than half a per cent to 90 per cent. And due to this change employers could no longer use the excuse that it was more risky for them to hire young women of childbearing age for top positions than young men.

Secondly, Iceland has passed a law similar to a law in Norway that guarantees women a minimum of forty per cent of all seats on the boards of public and private companies. Before, women had occupied less than ten per cent of those seats. I remember that Icelandic business women were very suspicious of this new law and wanted businesses to make this change themselves, without being forced to. Now, however, these women agree that the legislation was indeed necessary. It is too early to come to any conclusions about the effect of this legislation, but it looks as if women’s numbers on public and private boards are growing too slowly. But we have to remember that this law only came into effect a few months ago.

I think this kind of legislation is something that WIP could propose as a global goal, as the percentage of women on the boards of public and private companies are often very small, sometimes only 2-3 per cent.

Thirdly, it is very important that those who are in power always view all issues and decisions through a gender-equality-lens. By doing that, my Government introduced a Budget that was put together with a “gender equality compass”. That is, all decisions presented in the Budget were made with equal rights in mind.

-In your time as Prime Minister, your Cabinet was always gender-balanced, but you have also experienced Cabinets and Parliaments with a male majority. What would you say it changes when more women are indecision-making positions?

Yes, you are right. The Government that I led for over four years put gender issues very high on the agenda and we made progress. For the first time in Iceland´s history we reached gender equality in the Cabinet and for a while we even had a majority of female Government Ministers. It changes a lot to have a more equal balance between the sexes in the Cabinet.

I have personal experience of that as I was the only woman in Government for 7 years as Minister of Social affairs. With more women in Government issues are viewed from different standpoints, both issues regarding equal rights and, no less importantly, issues regarding spending cuts, taxation etc. which have a huge impact on the welfare system and equality in society as a whole. In my experience, women and men approach such issues differently – and my Government managed two very important things: To reverse the immense inequality that had become rooted in our society and ensure that Iceland became one of the most equal countries in the world at the end of my four years in power. And also to make an enormous progress in matters of equality and human rights.

–Your Government passed a law to shut down every strip club in the country. How was the debate within the Icelandic society over this issue?

It took approximately ten years to get a law through Parliament to ban prostitution, or, rather, paying for sexual favours. This was due to a lot of effort by the women’s movements of the political parties and also due to strong support from a group that fights sexual violence. Public opinion polls also showed that the majority of the Icelandic population wanted this law passed, as 70 per cent wanted to ban prostitution. This was a very important legislation and stopping human trafficking was a key motivation behind this fight.

-What is the gender budgeting initiative?

There is no fixed item in the Budget to finance this, but the Ministries’ staff – especially the staff in the Finance Ministry – is responsible for gender budgeting and they have the task of estimating the impact of all Budget decisions on equal rights. That is what we call gender economics management. And a ministerial committee oversees the execution of equal rights issues. This committee is made up of the Prime Minister, the Minister of Finance, the Home Affairs Minister and the Welfare Minister.

Many people have wondered whether Iceland would have been so badly hit if women had been in charge of the country‘s biggest financial institutions and major companies. Of course, we can never be absolutely certain if the economic collapse could have been completely avoided if women had been at the helm of these institutions and companies, but many factors indicate that this would have been the case. One of the indicators is that figures show that women generally tread more carefully than men in matters of finance. They show more responsibility and prudence and are less inclined to taking risks.

It is interesting that there were no female bank managers in the three major Icelandic banks that collapsed and caused most of the economic havoc in Iceland in 2008. Several smaller financial institutions also became bankrupt and not one of those was run by a woman. I wonder if that was a coincidence…