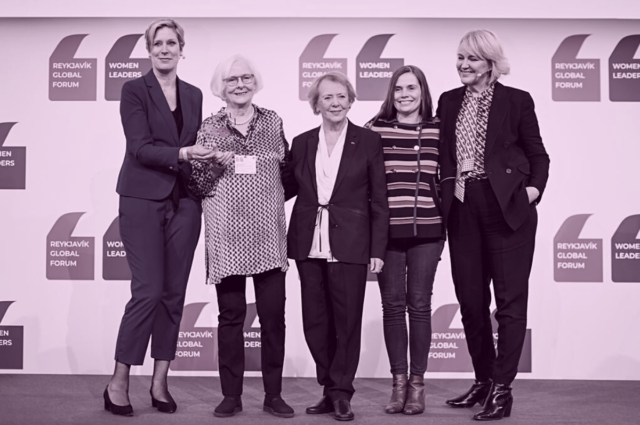 10 November 2021 – REYKJAVÍK, ICELAND – At the conclusion of the Reykjavik Global Forum, the 2021 Women Political Leaders Trailblazer Award  was given to Jóhanna Sigurðardóttir, Prime Minister of Iceland (2009-2013) and the world’s first openly LGBT head of government.

The WPL Trailblazer Award recognises women Presidents and Prime Ministers, who by reaching the highest echelons of politics have paved the way for future generations to pursue leadership roles.

“Iceland sets a powerful example of what is possible when more women lead. For many years, the country has been the global leader in the World Economic Forum’s Global Gender Gap Report, and this is thanks in part to trailblazers like Prime Minister Sigurðardóttir.” said Silvana Koch-Mehrin, President & Founder of Women Political Leaders. “Jóhanna Sigurðardóttir, like all of the WPL Trailblazer Award winners over the past five years, has worked to reshape the narrative around what effective leadership looks like, and all have opened doors for those who come after.”

Sigurðardóttir joins more than two dozen inspiring women politicians who have been recognised since the inception of the WPL Trailblazer Awards in 2017.

She began her political life while in the industry, serving as an active unionist and twice serving as chairman of the board of the Icelandic Cabin Crew Association, after having been for nine years as a stewardess for Loftleiðir Icelandic airlines. In 1978, when she was elected into the Althingi (the Icelandic Parliament) representing the Reykjavík constituency. Sigurðardóttir is Iceland’s longest serving member of Parliament,; she has served as Deputy Speaker, and has been listed among Forbes’ 100 most powerful women in the world.

About the WPL Trailblazer Award

Recipients of the 2020 WPL Trailblazer Award:

Recipients of the 2019 WPL Trailblazer Award:

Recipients of the 2018 WPL Trailblazer Award:

Recipients of the WPL Trailblazer Award 2017:

About The Reykjavík Global Forum

The Reykjavík Global Forum, previously Women Leaders Global Forum, was launched in November 2018, in Reykjavík, Iceland. The Reykjavík Global Forum is where women leaders discuss and share ideas and solutions to further advance society. This year, the Forum gathers leaders from around the globe, including Presidents, Prime Ministers, and other public figures, as well as women leaders from business, academia, civil society, arts, media, and more. Participants take part in the conversations, hence they are Conversationists. They all are playing a vital role in their respective fields sharing ideas, insights, and experiences. The Forum is annually co-hosted by Women Political Leaders (WPL) and the Government and Parliament of Iceland, under the heading Power, Together.

/ 08 July 2023
Manage Cookie Consent
To provide the best experiences, we use technologies like cookies to store and/or access device information. Consenting to these technologies will allow us to process data such as browsing behavior or unique IDs on this site. Not consenting or withdrawing consent, may adversely affect certain features and functions.
Manage options Manage services Manage vendors Read more about these purposes
View preferences
{title} {title} {title}