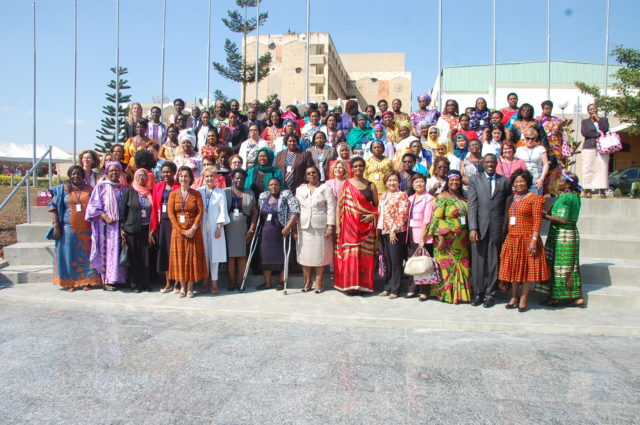 The Women in Parliaments Global Forum (WIP) convened the community of female Parliamentarians from 51 countries at the Parliament of the Republic of Rwanda for its WIP Summer Summit 2014 in Kigali, Rwanda from 1 to 3 July 2014.

In 2013, Rwanda was attributed the WIP Award for Leadership in Closing the Gender Gap for the highest percentage of female Parliamentarians worldwide. 63.8% of the Members of the Chamber of Deputies of Rwanda are women.

In most parts of the world, gender issues have been pushed up the legislative agenda over the last few years. However, even if more than 50% of the world’s population is female, only around 20% of political representatives are women.

The Women in Parliaments Global Forum,

> acknowledges that 20 years after the 1994 Genocide against the Tutsi, Rwanda has experienced an unprecedented process of state building achieving peace, reconciliation and security, aiming to foster unity and to create an inclusive Rwandan society; pays respect to the leadership of H.E. President Paul Kagame in stopping the Genocide and liberating Rwanda;

> welcomes the clear and unequivocal commitment of Rwanda’s leadership towards women empowerment, which has led to sustained achievements in Gender Equality;

> calls world Leaders and Parliamentarians to raise the levels of education, improve access to health care, combat poverty and establish a framework for equal opportunities to better empower women;
> calls world Leaders and Parliamentarians to fight gender based violence, discriminatory laws, practices, attitudes, and gender stereotypes that interfere with the Human Rights of  women and girls and limit their ability to fully participate in all parts of society; encourages country specific approaches to prevent abuses of women’s rights and provide cure for victims;

> expresses its concern of the specific risks for women from all kinds of conflict, be it international, regional or based on different beliefs; calls for the immediate release of the school girls in Nigeria, abducted since mid April; strongly condemns all other gender-initiated abductions in the past months; joins the pledge “Bring back our girls”, which is not a slogan, but a global moral obligation;

> demands the UN and its Member States to increase women’s participation in matters of global security, as prescribed by UN Resolution 1325; women shall not remain passive victims of war, but become active agents of peace;

> applauds the leadership work of the MDG Advocacy Group in promoting the implementation of the UN Millennium Development Goals; recognizes Rwanda’s exemplary progress towards implementing the MDGs; stresses the necessity of gender equality as a main priority in the framework of the post-2015 Development Agenda; highlights the specific role female Parliamentarians can play in the definition, implementation and scrutiny of development policy;

> emphasises the importance of enshrining gender equality in Constitutions, endorses in this respect the UN Women Constitutional Database as an important reference point;

> calls for a strong legal framework which guarantees women participation in decision-making organs at all level of governance, to mirror women’s representation in society;

> The Women in Parliaments Global Forum convenes world Leaders and female Parliamentarians next in 2015, to put women leadership in politics on the international agenda.