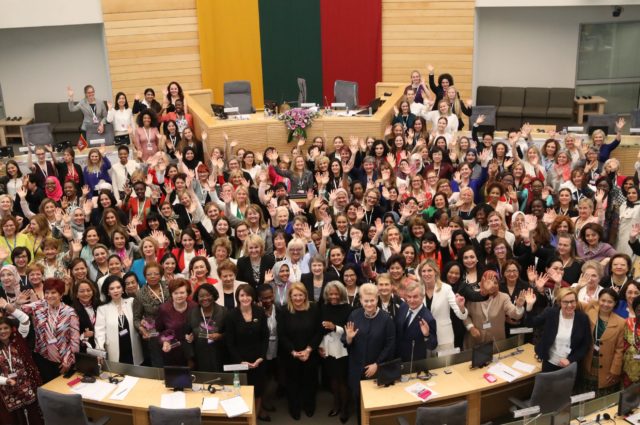 On 6-8 June, Vilnius is hosting over 250 female Heads of State and Government, Ministers, and Parliamentarians from all over the world for the Women Political Leaders (WPL) Summit 2018.

The WPL Summit 2018 will take place at the Seimas, the Parliament of Lithuania, which is co-hosting the event.

The WPL Summit 2018 coincides with Lithuania’s year-long national celebrations of 100 years of independence and of women’s voting rights in the country.

The WPL Summit 2018 is held under the patronage of Dalia Grybauskaitė, President of the Republic of Lithuania, and in cooperation with the Council of Women World Leaders (CWWL). The President will also host Summit delegates at her residency.

“Engaging both genders in the decision-making process is a precondition for democracy. A greater share of women in parliaments would help to address the problems arising from gender stereotypes. The countries that put a strong focus on gender equality adopt more balanced laws and pay greater attention to social issues.” said Viktoras Pranckietis, the Speaker of Seimas, the Parliament of Lithuania.

“The WPL Summit 2018 has its focus on women leadership, and the difference it makes. The shifting world security order, as well as today’s digital revolution, needs trusted leaders – it’s a call to action.” said Silvana Koch-Mehrin, President of WPL.

“100 years from now there might be, maybe, as many women political leaders as there are men, according to UN research. Another century until getting to parity is unacceptable.” she added.

The WPL Summit 2018 programme has been developed in cooperation with international institutions such as the European Institute of Gender Equality (EIGE), the European Investment Bank (EIB), the United Nations and others. It includes an outstanding selection of speakers, policy focused sessions and interactive discussions on leadership, legislation and political agenda-setting that creates results. Learn more about the WPL Summit 2018 Programme here.