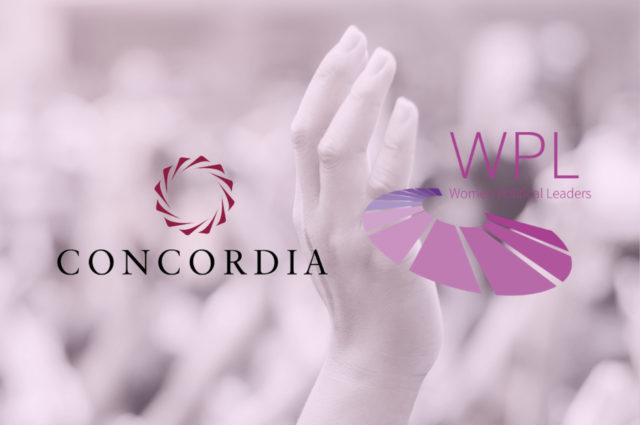 As part of the Concordia Annual Summit 2020, Women Political Leaders (WPL) and Concordia convened on 21 September 2020, a strategic dialogue, spotlighting women leaders as they discussed how to advance women’s inclusion and representation in government.

Throughout the past two decades, more women have felt encouraged to participate in the political sphere. However, their representation remains strikingly low, as the session’s moderator, Mr. Dauda Sesay, Vice-Chair of the Board of Directors of Refugee Congress, pointed out. Indeed, representation by women in national parliaments in 2019 was at 24.5%.

In the hopes of increasing this figure and women’s meaningful representation in global politics, this session analysed ways to create space and opportunity for women in government. As Dr. Sayu Bhojwani, Founder and President of New American Leaders, noted:

“Currently, when you look at our national congress, it is pale, male, and stale.”

The speakers discussed barriers to achieving more equitable representation and what can be done to accelerate progress.

According to Hafsat Abiola, Founder of the Kudirat Initiative for Democracy and President of Women in Africa (WIA), “We need to look at how these systems are operating. We need to dismantle [them]. We need to transform the system.

“One way to dismantle that system suggested by Ms. Abiola is to utilise social media to hold people in powerful positions accountable, raising awareness in a way that will be difficult to ignore.”

Echoing Hafsat Abiola’s words, Sayu Bhojwani, Founder and President of New American Leaders, highlighted the importance of decolonising the system of political representation, as a great many policies were designed by “white men who owned land and had slaves.

“Therefore, what is often labelled as democratic may not in fact be democratic at all, as it fails to incorporate the interests of diverse members of the population. To ensure equal representation for women and other marginalised groups, the culture narrative drafted centuries ago needs to be re-written.”

Building momentum on a separate point, Gabriela Cuevas Barron, President of the IPU and Senator for Mexico, focused specifically on female and youth representation in government. In most countries, for example, people under 30 years of age are not eligible to become parliamentary candidates, even though they account for half of the world’s total population. To address this disequilibrium, both cultural and institutional changes are needed, such as the adoption of quotas that support democratic and inclusive representation. For instance, as Senator Cuevas Barron remarked,

“If we look at the ten most successful countries in terms of the percentage of women in parliament, eight of those countries have implemented gender quotas.”

“When asked if they wanted to become leaders, [women] said no because to them, leadership was oppression, abuse of power, overwhelmingly male, etc. Then they [were] asked, would you like to see the education system in your country improve? And all the women said yes, and then they said, well, that’s what leaders can do.”

Another way to increase women’s participation in politics, as Stefanie Brown James suggested, is by instituting specific initiatives that focus on training women to run for office.

Lois Auta, Founder and Executive Director of Cedar Seed Foundation, raised an important issue that goes beyond the representation of women in politics: the inclusion of persons with disabilities in the political arena. Such inclusion is clearly essential, as persons with disabilities number one billion worldwide and should be encouraged to both vote and run for office. Lois Auta affirmed that

“it is time that we replace exclusion with inclusion. Women and other marginalised communities can find strength and meaningful alliances when working together to improve inclusivity in politics.”

When concluding the session, the speakers agreed that women must be encouraged to participate in politics, and communities must be motivated to support their participation. As Hafsat Abiola emphasised, people should not be afraid of championing equality and equitable representation: it is possible for everyone to access opportunity without doing so at the expense of others.