Power Parity: Getting to a new normal in political representation 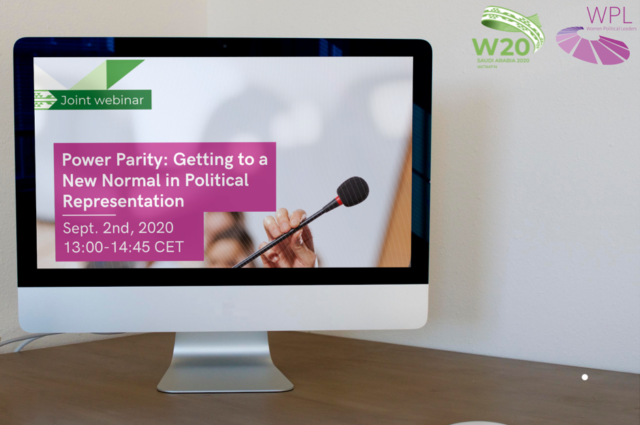 “When you hear the word “political leader,” who do you think of? A man or a woman?”

The answer is in the numbers: today, 93 percent of the world’s Heads of State and Government are men, men occupy more than two-thirds of the seats in Parliament, and only one G20 leader is a woman. In light of these facts, the need for inclusive decision-making is indisputable.

That is why WPL and W20 assembled an extraordinary panel of high-level speakers –  with an equal representation of men and women, to present equality which should be the norm – to discuss how to disrupt perceptions and advance women’s leadership through cultural, legislative and policy intervention.

Dr. Thoraya Obaid, Chair of Women 20, noted that gender-based stereotypes – both conscious and subconscious – act as a deterrent to the equitable access of leadership positions for women.

But where to begin?

“Law is the beginning of everything,” states Gabriela Cuevas Barron, President of the Inter-Parliamentary Union and Mexican Deputy. Consequently, G20 countries in particular need to lead by example, enforcing legislative policies that treat women and men equally, in addition to abolishing legislation that prevents equal access and rights.

José Manuel Barroso, Chairman, Goldman Sachs International, WPL Global Advisory Board Member, President of the European Commission (2004-2014) and Prime Minister of Portugal (2002-2004), echoed Deputy Cuevas Barron’s point, underscoring the symbiotic relationship between legislation and cultural change. Both speakers confirmed that affirmative action measures can only accomplish so much; they must be supported by accountability mechanisms and a redefining of social narratives.

In order to foster this shift, Yoko Kamikawa, Member of the House of Representatives, Chairperson, HQ for Promoting Dynamic Engagement of All Citizens, LDP, Japan, Minister of Justice (2017-2018, and WPL Ambassador), highlighted education as a tool to break the glass ceiling: digitalisation and access to vocational training are essential in guaranteeing women’s ability to confront negative stereotypes.

Mr. Barroso affirmed the need to include women, and other groups, in leadership stating “diversity is not an option.” Mr. Barroso’s words reflect diversity not only as a principle of democratic ideals, but as a proven pathway to success: studies have shown that when women are included in decision-making processes across levels, they bring an integral perspective that leads to more comprehensive and inclusive solutions.

Embracing diversity in decision-making would also improve economic growth and thus, as explained by Guðlaugur Þór Þórðarson, Minister of Foreign Affairs, Iceland, must be a priority for policy-makers: it’s a win-win game.

All speakers agreed that the issue of inclusivity can no longer be sidelined. Inclusive decision making is relevant to all of the challenges the world currently faces, from COVID-19 to climate change to racism. Only by championing inclusive decision making processes, with more women at the helm, can a more sustainable and equitable future emerge.

Discussion outcomes of this series of Webinars will contribute to the finalisation of the recommendations on Inclusive Decision-Making that W20 will transmit to G20 leaders and decision-makers.

This is the first of a series of webinar WPL and W20 are co-hosting to explore how to make decision-making more inclusive.