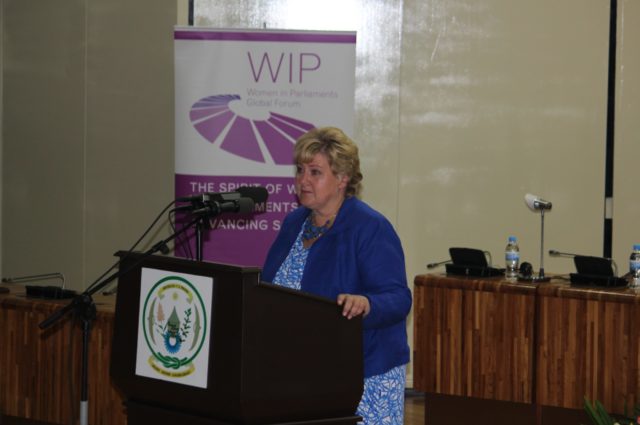 Your Excellency President Paul Kagame, Speaker of the Chamber of deputies, Members of Parliament, Ministers, Members of Women in Parliament’s Global Forum, Fellow members of the Millennium Advocacy Group, Ladies and Gentlemen

First of all, let me congratulate the people of Rwanda for having the highest representation of women in parliament in the world. With 64 % members of parliament being female, Rwanda is a role model for other countries to follow.

Rwanda’s gender-equality achievements are not limited to numbers. You are also showing the world the difference that women can make in healing the society after conflict and war through national reconstruction and reconciliation. I consider this lesson to be of vital relevance for the new development framework to follow on from the current Millennium Development Goals.

The Millennium Development Goals have provided a powerful spur to make the world a better place for girls and women. That said, with less than 550 days to go before the deadline, we are not yet where we should be.

We need to redouble our efforts and put to good use all the resources and good ideas at our disposal to achieve the goals we have set for 2015. Personally, I want to focus on education, especially for girls, in the remaining days and beyond 2015. I believe educating girls is the single most powerful investment for development. When you educate a girl, you educate a nation.

Moreover, we need to promote good governance and democratic development, and hereby take into account the pivotal role parliaments play in deciding on political priorities and in controlling that agreed priorities actually are implemented.

The next set of goals should therefore include democratic governance, the rule of law and human rights, as there are clear links between prosperity and equal opportunities for all. Prosperous societies are societies where no one is left behind.

Women parliamentarians are in the right place to influence the sustainable development goals before the adoption at the 2015 United Nations General Assembly and subsequently monitor the implementation. In my opinion, the post-2015 agenda needs to consider more widely what is needed to achieve full equality between men and women. We should also take the opportunity of this new agenda to rid our societies of unfounded, unjust and obsolete gender stereotypes.

We also need to include concrete targets for women’s participation in conflict prevention, reconciliation and peace making. I am, therefore, very pleased that the Common African Position on the post-2015 agenda is strong and clear on the crucial role of women in these areas.

By taking part in debates and helping to shape government budgets, women parliamentarians are playing an obvious and direct role in the global efforts to achieve the MDGs. Investing in health and education for all, and particularly for women and girls, is both the right and the smart thing to do. Evidence shows that countries that invest in human development, for example through health and education, achieve greater economic growth than those who fail to do so.

In order to be truly transformative, the new goals need to address these issues head on. Outdated beliefs must be done away with, be it in relation to roles, rights, duties or responsibilities – at home, at school, in the workplace and in society as a whole.

Before I close, let me illustrate what I mean by a transformative agenda. Gro Harlem Brundtland’s long tenure as Prime Minister of Norway affected the mindset of a whole generation. During that time, one little boy asked his mother the following question: “Mum, is it possible for a man to be Prime Minister?”

As the old adage goes, you can teach a man to fish to feed himself for a lifetime. But if you invest in a girl, she feeds herself, educates future children, lifts up her community and propels her nation forward – charting a path that offers dignity for all in the process.

Thank you for inviting me to speak to female parliamentarians in the Parliament of Rwanda, one of the most powerful symbols of female empowerment in politics.