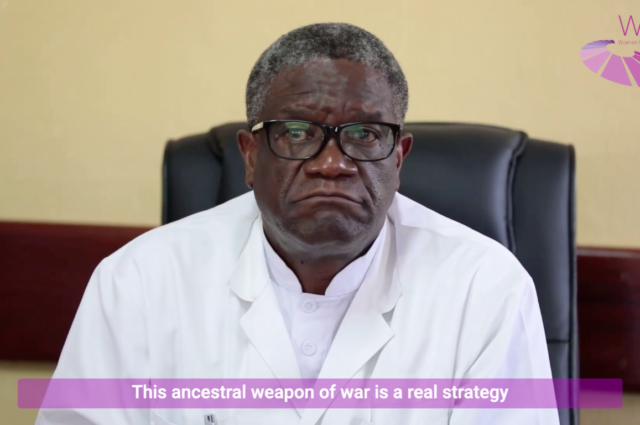 Sexual violence is both a physical and psychological form of warfare. It is weaponised to destroy the dignity and future prospects of communities and individuals. In order to recover and rebuild after experiencing conflict-related sexual violence it is essential to advocate a holistic, survivor-centred approach. This includes listening to experts to address the various dimensions of sexual violence and its ramifications, such as reparations, reintegration into society, adequate mental and physical healthcare, legislative reform, socio-economic support and confronting harmful cultural narratives.

On this day, Women Political Leaders engaged in direct conversation with Dr. Denis Mukwege, Founder and Medical Director of the Panzi Hospital, 2018 Nobel Peace Prize Laureate and Member of the WPL Global Advisory Board, to learn, and share, best practice strategies for eliminating sexual violence in conflict and helping survivors recover in all aspects of their lives. WPL encourages you to watch the entire discussion here: https://buff.ly/37Q7r5m

To successfully eradicate sexual violence globally, governments, international organisations and citizens must work together to root out the systemic causes of conflict-related sexual violence, which have endured for centuries. As Dr. Mukwege points out:

“Indeed, rape and sexual violence committed during conflict are often presented as the oldest crime of history and of humanity. This ancestral war weapon is a real strategy of humiliation and subjugation.”

Despite the atrocities that have been, and continue to be, committed, crimes of sexual violence in conflict often go unpunished. It is therefore imperative that the international community take a zero tolerance policy toward sexual violence, as advocated by the United Nations. Dr. Mukwege notes that achieving justice for survivors of sexual violence is also an important way to prevent future violence:

“Justice constitutes both a tool of prevention, of course, to avoid the repetition of crimes, and also a response from society, which has the duty to set rules and draw a red line against the unacceptable.”

It is the international community’s responsibility to draw this red line, which includes advocating legislative as well as cultural and normative reforms. Dr. Mukwege also emphasises the multi-dimensional nature of justice. He encourages the use of “tools of the transitional justice process,” such as reparations, to transform the international system into one that advocates holistic justice.

“One Stop Center”: a holistic approach to recovery

Dr. Mukwege’s inspirational work at the Panzi Hospital, which he founded in the Democratic Republic of Congo, has provided the rest of the world with a best-practice blueprint for how to help people who have experienced sexual violence. The hospital’s “One Stop Center” offers personalised support focusing on individual needs. And because crimes of sexual violence disproportionately impact women, his programme has developed gradually to meet the needs of female patients as no established model existed beforehand.

“Our goal is to contribute to the autonomy of women once they have completed their holistic care. Our experience shows us that it is only after they have healed their physical and psychological wounds; and once their socio-economic reintegration is on track, that the question of seeking justice arises among victims of sexual violence.”

At this point, Dr. Mukwege also highlights a vital transition for women who have experienced sexual violence from “victim” to “survivor.”

“And it is often at this stage that we witness the transformation of grief into power and strength to demand justice. This is when the victim becomes a survivor and a real player in society. She then becomes a true community leader for change, for the defence of human rights and dignity, as well as for the promotion of development and peace.”

A transitional and holistic approach helps women not only to recover from sexual violence, but to provide them the opportunity to become leaders for change. In this context, language is also extremely important. As Dr. Mukwege notes “the words we use reflect the mentality and behaviour of society.”

It is therefore our responsibility to make a concerted effort to understand and address these conceptual obstacles. Take, for example, the distinction between victim and survivor:

“The distinction between victim and survivor is not just a semantic detail related to trends, it is an evolution, and even a revolution. Language has an impact on victims and their societies.”

In Dr. Mukwege’s experience, the word “victim” is often stigmatising because it implies passivity and vulnerability, whereas “survivor” denotes a more positive and assertive image; an image of resilience.

Dr. Mukwege acknowledges some progress, however stigma and shame often remain with victims of sexual violence as opposed to the perpetrators.

“The preliminary investigation and trial cannot generate further violence against the victim. The prosecuting and judging authorities must stop judging the victim. Very often, the police officer who starts to gather a complaint from a woman who has been sexually abused will start the hearing by asking sexist and biased questions: “What were you doing there at that time? How were you dressed? Why didn’t you scream? Did you have any pleasure during the act? ». All these questions are specific to a patriarchal, macho and sexist culture that blames the victim.”

Dr. Mukwege’s poignant illustration reflects a disheartening global narrative in which women are blamed and marginalised for their behavior in relation to instances of sexual violence. Not only does this further traumatise victims, but it also avoids the process of confronting the systemic patriarchal causes of this perspective. Addressing sexual violence requires empathy, understanding and specialised training.

Reflection in crisis: how can we change the future?

Dr. Mukwege also notes a gap between legislation and implementation. This becomes even more apparent in times of crisis, where inequalities and imbalances are exacerbated. The Covid-19 pandemic is no different:

“As for the impact of COVID-19 on women,  as in other countries, they are often on the front line. In Africa, in the Democratic Republic of Congo we see that women are the ones who are in the markets, in the healthcare sector and therefore, are more exposed than men.”

With COVID-19 challenging the inability of the international community to address inequalities that have existed for centuries, it’s time to acknowledge the dire need for collective action and education. We cannot return to the structures and injustices of a pre-COVID-19 world.

“Education is the key to changing the paradigm of male domination….It is only through this awareness-raising work that we will be able to build a new generation educated with respect for equality between girls and boys, between women and men.”

It’s time to weaponise the voices of the global community to put an end to this centuries old tactic of violence, intimidation and hate against women.