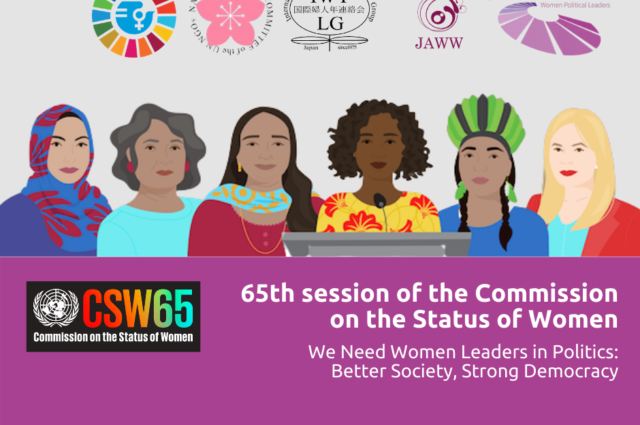 Commission on the Status of Women, 65th Edition, Side Event

As part of the sixty-fifth session of the Commission on the Status of Women, Women Political Leaders, the Permanent Mission of Japan to the United Nations, Japan Women’s Watch, the National Women’s Committee of the United Nations NGOs, and the International Women’s Year Liaison Group organised a webinar entitled We Need Women Leaders in Politics: Better Society, Stronger Democracy. Held on March 23rd, this virtual event convened distinguished panelists to discuss the importance of women’s leadership and the barriers that women face upon entry into decision-making positions.

The conversation began by sharing perspectives on why we need more women in leadership positions. Golriz Ghahraman, Member of Parliament of New Zealand, pointed out that the lack of women’s representation is a breach of their fundamental rights. As leaders, women are known to give priority to the most vulnerable populations, but that should not be the sole reason to encourage the increase of women in leadership positions. As MP Ghahraman remarked, “Participation cannot be on a moral basis; it has to be because [women are] human, and we deserve to be a part of this representation.”

Although it is indeed a fundamental right that women be represented, recent data from the IPU demonstrates that we are far from reaching parity in parliaments. According to Zeina Hilal of the Gender Partnership Programme for the Inter-Parliamentary Union, women account for at least 50% of political leadership in only three parliaments worldwide: Rwanda, Cuba, and the United Arab Emirates. Ms. Hilail noted that various factors can hinder women’s participation and the assumption of leadership positions, including violence against women in politics, which prevents female MPs from working safely and effectively. Because of this, parliaments need to be incentivising female leaders and implementing policies to ensure that actions are taken towards real and more inclusive representation. As Minister Tamayo indicated in her opening remarks of the session, “in order to leave no women behind, we must ensure that the need for gender equality in the political domain has never been greater.”

Beyond the crucial topic of women leadership, the notion of intersectionality must also be taken into consideration, as indicated by Minister Datuk H. Zuraida Binti Kamaruddin, Minister of Housing and Local Government, and WPL Ambassador of Malaysia. Women are further oppressed by categorisations other than gender, such as race, sexuality, and social class. Thus an intersectional lens is essential to tackling inequalities and ensuring that every woman is being rightfully represented. In the same thread, and speaking from her personal perspective, MP Ghahraman shared her experience as a Parliamentarian who is both a woman and a migrant. She faced multiple barriers to entering the political sphere, including both sexist and xenophobic remarks made against her.

In concluding the session, the panel discussed how everyone – not only women – has a role to play in promoting equality between women and men. Whether male counterparts, parliamentary institutions, or civil society at large, all must advocate for gender-sensitive legislative bodies that are beneficial to society as a whole. Globally, women currently make up just 25.5% of national parliaments, and less than 6% of heads of state are female. Now is the time to acknowledge that greater numbers of women in politics will unquestionably result in better representation, better governance, and better nations.