When women lead at the SDG Action Zone 2020 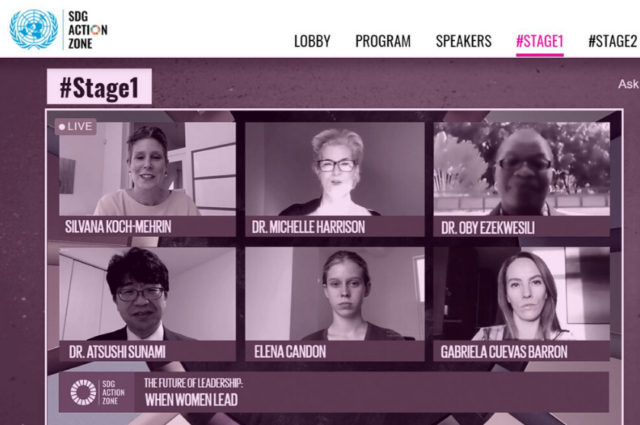 At the first ever virtual SDG Action Zone 2020 – an event that takes place annually during the United Nations’ General Assembly to drive exponential change on the Sustainable Development Goals – WPL amplified women leaders’ voices and convened pressing conversations to reflect on what is needed to accelerate equality between women and men and to build a stronger, more equitable society.

The future of leadership: When women lead

Women Political Leaders’ (WPL) session “The future of leadership: when women lead” challenged leaders, and the global community, to face the facts: the numbers, data, and empirical evidence clearly demonstrate women’s concrete contributions to leadership, in addition to outlining obstacles in their path.

“The COVID-19 pandemic has presented us all with a very clear choice: either we take the time to take a really big step forward and accelerate change, or we risk losing – losing the progress that has been made, especially in the area of equality between women and men in leadership,” stated Silvana Koch-Mehrin, President & Founder of WPL, inviting panellists to participate in the intergenerational dialogue.

The first step that the panellists recommended is to utilise evidence as provided by reports like the Reykjavik Index for Leadership, which measures how women and men perceive women as leaders, must be yielded to inspire change.

Perceptions in particular can be difficult to change as Michelle Harrison, Global CEO Public Division Kantar, emphasised. However,

“If we want to hold ourselves accountable to the interventions that we’re making to try and drive forward equality between men and women, then the most important thing is that we start with a baseline, so that we can track that progress over time.”

Without baseline data it becomes difficult to account for progress.

“I believe that by now we should be done with trying to persuade people of the business of what we think is right to do. We should really show them that when you are faced up with the evidence of how much better our world would be represented in terms of the critical development issues…” it is not possible to deny women their rightful places as leaders.

And where do men fit into this discussion? How can they contribute to increasing the meaningful participation of women in positions of leadership?

Atsushi Sunami, President of the Sasakawa Peace Foundation, underlined the opportunity provided by the pandemic; an opportunity for men to educate themselves:

“We have a chance now to talk about, seriously, gender equality issues from a male point of view, but I think not just leaders talking about the importance of the issue, but to have a broader educational opportunity for males to share the same kind of life experience with women.”

Confronting communities with experience, data and evidence will make it more difficult to dampen progress, but, more importantly, it will ensure that future generations are taught  to understand the fundamental principles of equality between women and men.

During this intergenerational session, Elena Candon, #Girl2Leader Delegate, explained her perspective as a 15 year old trying to become more involved in political leadership:

“For one thing, you have to take into consideration that (my generation) has an entirely different perspective. I mean, we grew up thinking why don’t more women, instead of why can’t women? So, we look at it more as why is it not 50/50?”

“25 years ago there were only 11% of women occupying the seats of parliament…the percentage (today) is not that optimistic. What are we going to say to girls…that we  failed? That 25 years later it is only 24.9%, that only one out of every four seats of parliament is represented by a woman. That is not democratic. That is not inclusive.”

The speakers’ points of view were clear: Women cannot afford to wait another 25 years. Neither can the world. It is time to utilise evidence, facts, and statistics to mobilise global action.

This session harnessed the irrefutable power of evidence and inspired change as the world begins to write a new post-pandemic narrative.

Stay tuned for the full session on demand!