Why is Iceland the world’s global leader in gender equality? 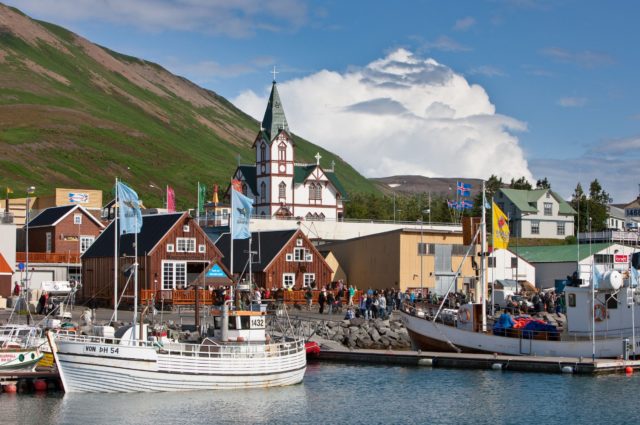 Since 2009 and according to the World Economic Forum’s Global Gender Gap Report, Iceland is the global leader in gender equality. During the WIP Study Trip (3-4 April), 50 international female Parliamentarians will discuss about the policies that were needed to achieve this position and about whether the Icelandic model can be exported.

Women’s suffrage was introduced in Iceland as early as 1915 and it was the first country in the world to elect a female Head of State, Vigdís Finnbogatóttir (1980). During the last decade, the country has passed, among others, laws to ensure gender balance on boards, to ban strip clubs nationwide and to secure paid paternity leave for 3 months.

Take a look at these facts and figures about Iceland and its history of gender equality and political empowerment of women (click here to share them on social media):

For the past five years, Iceland has topped the rankings of the World Economic Forum’s Global Gender Gap Report. The score is based on good results in terms of political empowerment and educational attainment and on improvements in women’s economic participation.

Iceland approved equal inheritance rights for men and women in 1850.

In 1850 women gained the same inheritance rights as men; until then daughters only had the right to one third of the inheritance.

The female suffrage was introduced in Iceland in 1915.

Women gained the right to hold local office in 1908. The same year, four women were elected to the city council in Reykjavik. Following this success in the local elections, women over the age of 40 gained the same rights in national elections in 1915, and in 1920 all women did.

The first woman elected to the Icelandic Parliament was Ingibjörg H. Bjarnason (1922).

The first female representative, Bríet Bjarnhéðinsdóttir, was elected as an alternative member but never actually took a seat in the Althingi. The first woman to be elected and actually sit as a member of the Althingi was Ingibjörg H. Bjarnason, who headed a Women’s List in national elections held on 8 July 1922.

The first female mayor in an Icelandic municipality was elected in 1957.

In 1958 women were only 1% of all council members in Iceland. In 1957 the first woman became mayor in Kópavogur and in 1959 in Reykjavík.

The first female Cabinet Minister in Iceland was elected in 1970.

In 1970 the first female cabinet minister was appointed. The same year, inspired by women´s rights and feminist movements all over the world, the “Red Stockings”, movement was founded and was a key radical force in raising awareness on various gender equality issues.

Icelandic women went on strike nationwide on the 24 October 1975.

On 24 October 1975, more than 25,000 women in Iceland took a day off to emphasize the importance of women’s contribution to the economy, both in paid and unpaid work. As a result the society as a whole came to a halt. Also that same year, a law on three months maternal leave was approved, a new law on abortion, reproductive and maternal health was passed and the Women´s History Archives was founded.

Iceland elected the first female Head of State in the world – President Vigdís Finnbogadóttir- in 1980.

The fourth President of the Republic of Iceland was Vigdís Finnbogadóttir. She was elected in 1980 and stepped down in 1996 after four terms in office. Vigdís was the first woman in the world to be democratically elected Head of State. She is an important role model for Icelanders of all ages and remains active in public life and in the international community.

42% of the candidates for the last elections in Iceland (2013) were women.

633 women ran for office at the election to the Icelandic Parliament.- Today, 39,7% of the Parliamentarians in Iceland are women.

Iceland is ranked number 12 in the Inter-Parliamentary Union’s World Classification. 25 out of 63 seats of the Parliament of Iceland are occupied by women. Iceland’s electoral system is based on proportional representation.

Iceland has a high rate of women’s participation in the labour market (77.6%)

Since 2003, Icelandic fathers have an independent (not transferable to the mother) right to 3-months of paid parental leave.

In the year 2000 the law regulating parental leave changed dramatically. Now Icelanders have a parental leave scheme that is unique. The total leave period is nine months long. Each parent has three months leave which is non-transferable and in addition the parents can divide three months as they like. During their leave parents who have been working full time receive 80% of their former salary up to a certain ceiling. Fathers have grasped this opportunity with enthusiasm and around 90% use their paternal leave.

A full ban on strip clubs was approved in Iceland in 2010.

In 2009 the purchasing of sexual services was made illegal with changes to the 206th article of the penal code (No. 19/1940). It is illegal to advertise and to benefit from prostitution, e.g. through pimping and other means. In 2010 a full ban on strip clubs was enacted with a change in the act on restaurants, accommodations and entertainment (No. 85/2007), banning the profiting from nudity.

Iceland approved a 3-year plan on implementing gender budgeting in 2011.

Implementation of Gender Budgeting started in 2009. The objective is to make the impact on the genders visible, so it is possible to respond and re-evaluate policies, expenditures, and sources of revenue in accordance with objectives for equality.

Iceland passed a new law that obligates companies to have a minimum of 40% of women or men in their boards in 2010. The law took effect on 1 September 2013.

In 2010 an amendment to the laws on public limited companies (No. 2/1995) and private limited companies (No. 138/1994) obligated companies that have over 50 employees to have both women and men on their company boards and if the board-members are more than three, the percentage of women or men cannot be under 40%. These amendments also included changes that will make monitoring easier. These changes took effect in 2013.