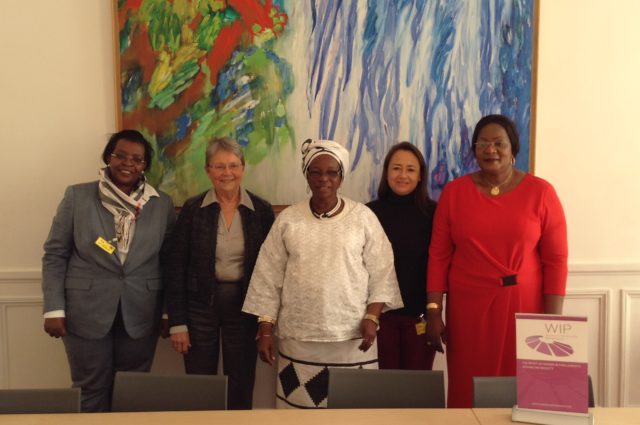 Despite calls from the international community, women still remain remarkably absent from the negotiation talks. The Women in Parliaments Global Forum (WIP) and the National Democratic Institute (NDI) have developed a programme to facilitate the participation of female Parliamentarians in high-level global fora, with the support of USAID. The purpose of this project is to ensure that their voices and perspectives are taken into consideration in decision-making and policy processes.

On the occasion of the 21st session of the Conference of the Parties to the UNFCCC (COP21) in Paris, WIP and NDI set up a delegation of female Members of Parliaments to attend the conference from the 3rd until the 9th of December. The delegation included Joséphine Drabo, MP from Burkina Faso, Camille Ake, MP from Ivory Coast, Taiba Zahidi, MP from Afghanistan, and Margaret Zziwa, MP from Uganda.

On the 4th and 5th of December, the delegation participated in the GLOBE Summit, which was co-organised by Globe Legislators and the National Assembly of France. The GLOBE Summit recognised the momentous nature of the Paris climate summit and the need for a strong and coherent response from Parliamentarians for the implementation of the new agreements.

On the 6th of December, WIP and NDI organised a workshop on climate and gender. The session provided the Parliamentarians with a solid knowledge on gender and climate change and with concrete ideas on how to produce a specific action plan in their national Parliaments. The presentation was given by Malini Mehra, CEO of Globe Legislators. Lydia Toto Raharimalala, MP from Madagascar, and Fadika Sarra, MP from Ivory Coast, also attended this activity.

On the 7th and 8th of December, the members of the delegation contributed to several side events organised by the Gender and Development Platform of the French Ministry of Foreign Affairs.

On the last day of the programme, the delegation, joined by Ximena Ponce, MP from Ecuador, had the chance to meet with Catherine Coutelle, President of the Delegation on women’s rights and gender equality of the French National Assembly. During the informal meeting, Coutelle highlighted the work of the Working group on women’s empowerment and climate change issues, created on the initiative of the Presidents of the High Council for Gender Equality and of the Delegations for Women’s Rights of the National Assembly and of the Senate. The working group issued earlier this year a Declaration called ‘Women as actors in addressing climate change’, with the objective to incorporate women’s empowerment and gender equality in the core text of the Paris Agreement.

WIP and NDI will set up a delegation of female Members of Parliaments to attend the World Bank Group Fragility, Conflict and Violence Forum in Washington DC in March 2016 and final prep meeting for the Habitat Summit in Jakarta, Indonesia in July 2016.