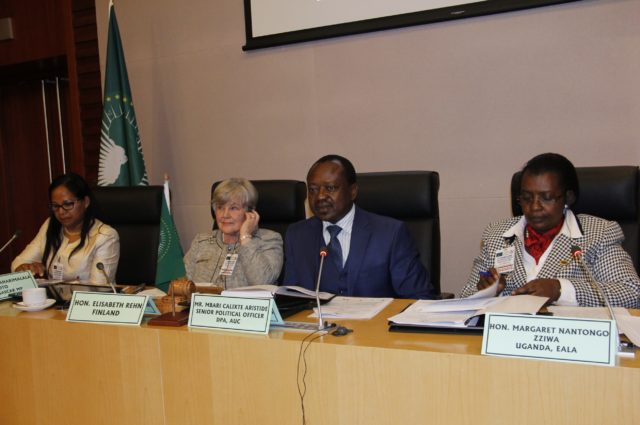 The Women in Parliaments Global Forum (WIP) participated in the African Union Gender Pre-Summit on January 17-21, 2016 in Addis Ababa, Ethiopia. The Summit was organized by the African Union Commission Directorate of Women, Gender and Development, the Gender is My Agenda Campaign (GIMAC), and AU partners, under the Presidency of H.E Dr. Nkosazana Dlamini Zuma, Chairperson of the AUC, as a part of the 2016 African Year of Human Rights, with a particular focus on the rights of women.

WIP was invited to co-host a session called Political Participation and Representation of Women – Public Office and the Judiciary. The objective of this session was to assess progress on women’s participation in politics, public office and the judiciary and identify challenges and barriers hindering their effective participation as well as develop strategies to accelerate women’s agency and leading role in politics, public office and the judiciary. Two members of Parliament from the WIP network spoke at the session, representing WIP: Honourable Margaret Nantango Zziwa, Member of the East African Legislative Assembly representing Uganda, and Honourable Lydia Raharimalala Toto, Member of Parliament of Madagascar and President of the Women Caucus.

Margaret Nantango Zziwa commenced the session with a speech on women’s participation in elections and political parties, where she expressed her agreement with the key findings of the WIP-World Bank Study “The Female Political Career”. She highlighted her own experiences while standing for elections, and some hindrances to women’s participation in elections, such as the lack of educational opportunities and severe gender stereotyping. However, she added, “Suffice to say despite these hindrances several (many) women have broken the chains and have risen to the highest levels of political offices”. She also indicated some major opportunities available for women, such as positive affirmative action. Finally, she listed a few recommendations on how to succeed in standing for public office.

Lydia Raharimalala Toto, on the other hand, spoke on the role of women in public sector governance. She emphasized the importance of equal representation of genders in the public sector, and the critical role networks of women Parliamentarians play in achieving this objective. Next, she outlined some recommendations on how to increase women’s participation in governance, including creating more educational opportunities for girls and women, and implementing policies to end discriminatory practices against women. She called for common national policies on gender and for assistance from NGOs to create remedial practices and concluded her speech by saying, “The world will not be able to develop in a sustainable way if half of its population is poor, sick, and has neither education nor training”.

WIP participation in the Gender Pre-Summit also included the display of the WIP Leadership Campaign. The WIP Leadership Campaign is focused on raising awareness on the importance of including more women in political leadership, and includes over 50 testimonials of male leaders. The collection of testimonials was also exhibited during the African Union Summit.
The Gender Pre-Summit was concluded with the passing of an outcome declaration, which will be available to the public soon.
share