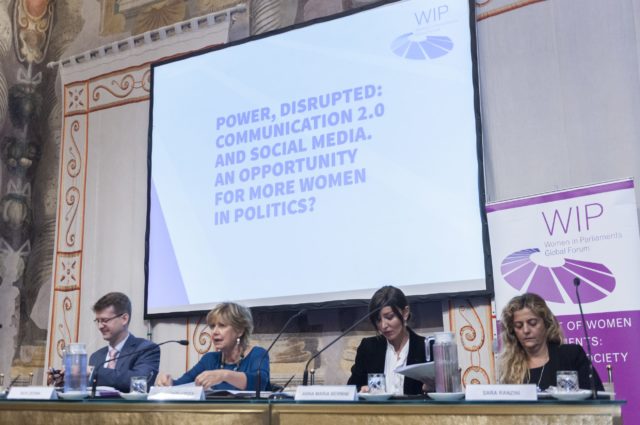 On 18 October, the Women in Parliaments Global Forum (WIP) organised the roundtable discussion “Communication 2.0 and Social Media. An opportunity for more women in politics?” at the Italian Senate. This discussion was hosted by Linda Lanzillotta, Vice-President of the Italian Senate and Member of the WIP Executive Board. Speakers included Anna Maria Bernini, Member of the Senate, Anna Ascani, Member of the Parliament, Rick Zedník, WIP CEO, and Sara Ranzini, Communication Director, Facebook Italy.

During the event, WIP presented its new study “Social Media: Advancing Women in Politics?”, elaborated by Harvard University. Some of the key findings of the report were discussed in Rome: more than 85% of female legislators make use of social media; the study confirms that social media are a political equaliser; and the “mommy penalty” doesn’t apply to politicians’ social media use. The discussion also addressed other questions such as, what is the full potential for new technologies in facilitating greater diversity in our leadership? What impact does technology have on the careers of global leaders?

“Social media, like television, has changed the communications landscape. This study confirms that these tools present another opportunity for women interested in entering politics. If they properly utilize these tools, they have the opportunity to receive the same visibility as their male counterparts,” stated Linda Lanzillotta, Vice-President of the Italian Senate.

Anna Maria Bernini, Member of the Senate, advised that it is important to always try to find the balance between work and private on social media while arguing that social media are helping female MPs take the lead in controlling the messaging.

MP Anna Ascani cautioned the potential threats of social media, arguing that we need to educate young people because what you do online talks about you as a person. Sara Ranzini, of Facebook echoed that sentiment saying that you need to be the same person, real and digital.

Six female members of the Libyan Parliament that were on mission in Rome, also joined this WIP event. Our informative discussion was covered by various Italian news outlets, including Corriere della Sera and prime time on TV News RAI.