WIP Study Trip to Iceland – What can be learned from the country’s experience? 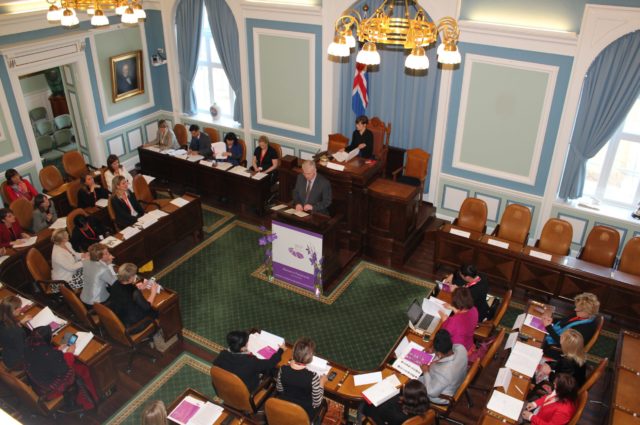 The WIP Study Trip to Iceland was a successful learning exercise about the global leader in gender equality. International female Parliamentarians coming from more than 20 countries had the opportunity to meet the President, the Prime Minister, Members of the Government and Members of the Parliament of Iceland during the 2-days Study Trip in Reykjavík (3-4 April).

Three milestones in the history of Iceland were essentially mentioned during the Study Trip:

Today, 39.7% of the Icelandic MPs are women. Although this is one of the highest percentages in the world, the 2013’s elections are seen as a step back for the women political empowerment in Iceland (before the elections, 43% of the MPs were women). “A higher number of women in decision-making positions will not only change politics but it will change the world,” argued Hanna Birna Kristjánsdóttir, Minister of the Interior.

The Icelandic laws which have contributed to closing the gender gap in the country were widely discussed with the local politicians and the female CEOs of the companies Rio Tinto Alcan, Actavis, Steinunn and Lýsi. “Maybe not everything can be copied by other countries, but there are lessons that we can take away from Iceland,” defended Ragnheiður Elín Árnadóttir, Minister of Industry and Commerce, who hosted the visits to the local companies.

Despite ranking number one in the WEF’s Global Gender Gap Report 2013, the Icelandic politicians stated that they are not yet there. “We need to break the glass ceiling over and over again,” said Katrin Juliusdottir, former Minister of Industry, who had twins during her mandate. Inequalities like the gender pay gap and the gender pension gap are some of the old new problems to be tackled during the next years; while monitoring the effect of the new legislations like the gender quotas in companies.