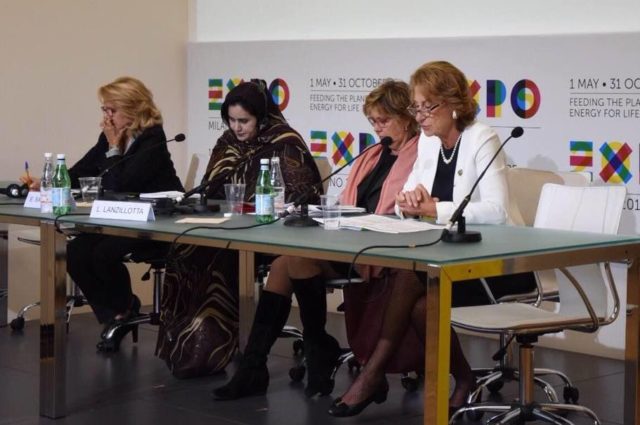 On 13 October, the Women in Parliaments Global Forum (WIP) held a meeting jointly organised with the Italian Senate (Senato della Repubblica) and Chamber of Deputies (Camera dei Deputati) at the EXPO Milano 2015.

“Feeding the Planet, Energy for life” was the core theme of Expo Milano 2015 which provided an opportunity to reflect upon, and seek solutions to guaranteeing healthy, safe and sufficient food for everyone, while respecting the planet and its equilibrium.

The meeting gathered international female Parliamentarians and renowned experts and discussions  focused on the role of women in: agriculture and development, the fight against food waste, and health and nutrition.

High level speakers such as Linda Lanzillotta, Vice President of the Italian Senate and WIP Ambassador; Emma Bonino, Honorary President of Women for Expo and former Minister of Foreign Affairs of Italy; Patrizia Grieco, Chairperson of ENEL; Julie Ward, Member of the European Parliament; and Florence Tartanac, Senior Officer and Group leader of the Market Linkages and Value Chain Group at FAO, contributed to the discussion to pursue solutions to improve food and nutrition security around the world.

As a result of the meeting, the international female Parliamentarians adopted a Declaration that has been submitted by the WIP Country Ambassador and Vice-President of the Italian Senate, Linda Lanzilotta, to the UN Secretary-General Ban Ki-Moon.

As a central pledge, Female Parliamentarians committed to promote policies for development cooperation aimed at supporting the role of women in all fields and at removing obstacles for women’s access to and control over land, water and resources in general as a means to stop climate change and create conditions for a peaceful world where human rights and a decent life are guaranteed for all women and men.