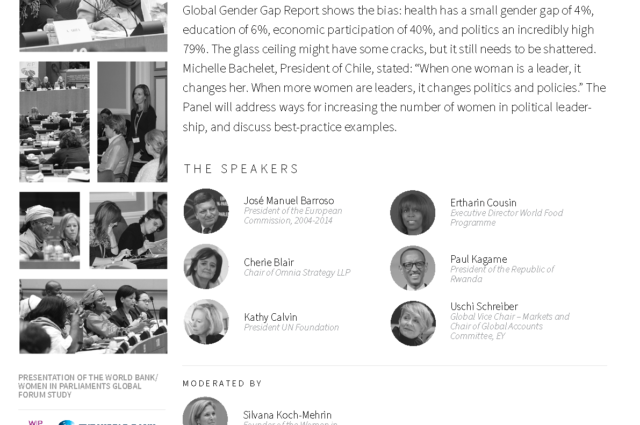 Women remain significantly underrepresented in politically elected positions across most developed and developing countries, as well as similarly underrepresented in senior ministerial posts, according to a joint study by the World Bank and the Women in Parliaments Global Forum (WIP), supported by EY.

The study, The Female Political Career, reflects survey results from male and female national political representatives across 84 countries around the world designed to understand the hurdles women face in launching and sustaining successful political careers.

The findings of the study highlight that because of gendered social roles and social expectations, the pool of female political candidates is inherently smaller than male candidates even before an election begins. Because of this overarching factor alone, women face an uphill climb toward equality in politics from the very first obstacle. Once in office, female legislators are more likely to continue to face gendered roles and expectations, capping ambitions as surely as limiting their success. While many current female legislators nevertheless prevail against these headwinds, the majority of parliaments considered in this study are far from being equally represented by both sexes.

Nayé A. Bathily, Head of the Global Parliamentary Unit, External and Corporate Relations of the World Bank, says:

“This study provides an original survey to learn about the barriers that women face on the road to a career in politics. In collaboration with academic partners from leading research universities, this study represents a major advance in global knowledge on this critical front. The data distilled in this report casts an important light on the nature of the constraints women continue to face globally to enter the male-dominated world of politics.”

“The lack of female representation in our national legislatures, and in ministerial positions, matters as much as in the corporate boardroom. Research supports the view that the presence of women in public life, including on the political stage, makes a real difference. Women are more likely to act in a bipartisan manner and are more likely to surface new ideas and bring new issues to the policy table. Increasing diversity in our parliaments can have a positive impact on government transparency and result in policy outcomes more inclusive of the whole population.”

“Formal barriers to women participation in politics are nowadays almost non-existent around the world. However, a glass ceiling remains. The results of this first study tell the same old story. Family commitments still constitute a major source of concern for women. Moreover, women and men also have systematically different levels and types of networks of political support. Despite recent progress, the glass ceiling remains. There might be some cracks, but it still needs to be shattered.”

Key findings of the study (by Frances Rosenbluth, Yale University; Joshua Kalla, UC Berkeley; and Dawn Teele, The London School of Economics) include:

The report underscores an emerging global consensus around the importance of gender equality in all spheres of life, including political representation and leadership in business. The failure of national legislatures to reflect their populations is a sign of entry barriers, and deprives societies of female political talent. Although some countries employ quotas to hasten representational equality, women still occupy only 20%t of lower-level parliamentary seats, on average, internationally.