When women lead: what matters 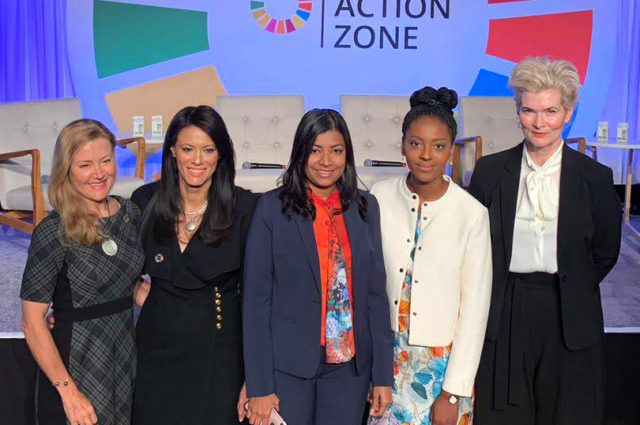 On 25 September, Women Political Leaders held the panel “When women lead” at the UN General Assembly, as part of the SDG Action zone regarding SDG target 5.5. Target 5.5 aims to “ensure full participation in leadership and decision making” between men and women. Various leaders from around the world participated in the panel, sharing their solutions, and how they have personally played a part in trying to reach the target.

The panel mentioned several areas of importance when it comes to increasing the role of women in politics. First, is the importance of research. In order to create targets and meet them, the world must know what they are looking at which can only be done through the lens of fact-based research.

For example, The World Bank’s project titled “Women, Business, and the Law” reveals that only 6 countries have laws about gender equality. Despite the global push for equality between women and men, the legal framework of most countries does not actually reflect this.

The next area of importance that the panel touched on was that of attitudes. The Reykjavik Index for Leadership, a study realised by Women Political Leaders and Kantar which measures attitudes to women in leadership was cited. The study shows that a majority of people do not equally view men and women in terms of suitability of individuals for positions of power. Without positive attitudes that reflect our goals, women will not have the support that they need to enter or thrive in the political world.

The panel also discussed the importance of outreach and commitment. Not only is it important to set goals, but it is paramount that these goals are persistently acted on. Likewise, others should be aware of these goals, in order to increase support and participation.

To this end, storytelling can be a powerful tool. Creating a social narrative about what a girl can be is important to stimulate reflections. Social media is a useful and effective tool for outreach, especially when It comes to sharing such a narrative as well as stories and influencing younger generations.

Panelists agreed that while outlining a good plan is crucial, implementation is key. Implementation which relies on the concerted efforts of all partners; politicians, the private sector, the international community, and NGOs.

Women Political Leader’s Panel “When women lead” discussed global progress in regards to SDG target 5.5 and highlighted several areas of importance. It stressed the role outside of women politicians and discussed the importance of role models, mentors, sponsors, and men as champions of women.