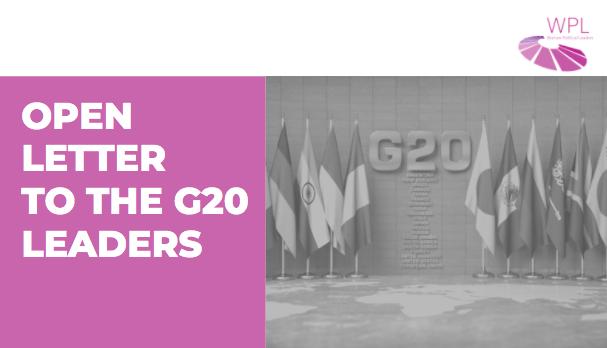 Women Political Leaders (WPL) has been closely monitoring the developments in Afghanistan since the withdrawal of U.S. and NATO forces – which was completed at the end of August. Despite the Taliban’s repeated assurances to the international community about establishing an inclusive government that represents all parts of society, Afghan women politicians are not only being sidelined from participation, they are also suffering threats and violence.

The new Afghan government excludes women politicians. What was once the Women’s Affairs Ministry is now replaced with the Ministry of Vice and Virtue, known for functioning as a morality police that enforces Sharia law and horrific punishments for women found guilty of different ‘crimes’ – including of dressing in ways the Taliban don’t like, attending an educational institute or being out of their home without a male guardian. More than a dozen Afghan women legislators have already been evacuated from the country, while others have gone into hiding, fearing persecution and death. The lives of women Members of Parliament, Members of regional or local political representations, lawyers, judges, activists and journalists who remain in the country are under threat, as the Taliban continues to conduct targeted door-to-door visits in search of ‘opponents’.

With the Taliban now seeking international recognition and assistance, and as world leaders begin to engage with the de facto Afghan authorities, the need and opportunity to ensure the safety and security of Afghan women leaders is high. The European Union’s recent announcement at the special G20 Summit, pledging a one billion Euro aid package for Afghanistan, comes at a crucial time, along with the first in-person talks with U.S. officials since the American withdrawal. While the main objective is averting humanitarian and socioeconomic collapse in Afghanistan, funding must be contingent on evidence of adherence to ensuring the safety and security of women political leaders. As a key player that will help shape Afghanistan’s future, the G20 must establish an effective and dedicated mechanism, with a clear mandate, that monitors the situation of women’s rights in Afghanistan and holds the Taliban responsible and accountable.