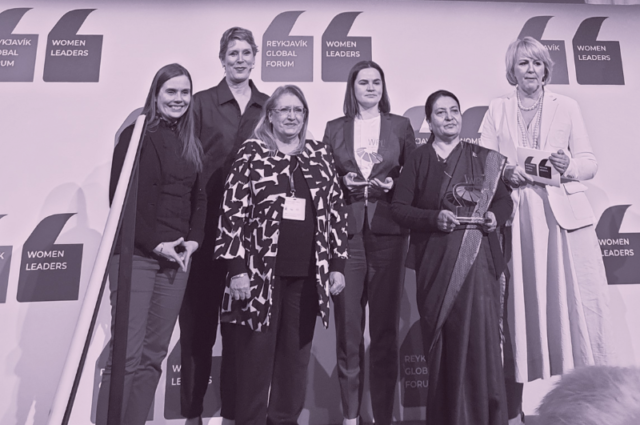 Press Release – November 9, 2022 –  The awardees of the WPL Trailblazer Award were announced today at the 2022 Reykjavík Global Forum that convened more than 400 Conversationists from 85 countries.

The WPL Trailblazer Awards recognise both incumbent and former women Presidents and Prime Ministers who are breaking political glass ceilings and reaching the highest echelon of political leadership around the world.

President Bhandari is the second president of Nepal after the country adopted the democratic-republican system, and the first woman president to be elected by the Parliament in 2015. She was elected for her second term in 2018. She was the architect behind the introduction of a special parliamentary resolution that mandates a minimum 33 percent women representation in legislative bodies, which was later institutionalised in the constitution.

“In this important Forum, I can see women and girls in all their diversity; women who have broken the barriers and are an inspiration for others around the world. To be awarded in this Forum is a matter of great satisfaction and has added a greater sense of responsibility to me,” said President Bhandari, “I commend WPL for creating an ecosystem of women leaders across the sectors. This is truly a mission to build a ‘society where no one is left behind’”.

Sviatlana Tsikhanouskaya is the leader of the Belarusian democratic forces who independent observers agree won the presidential election on August 9, 2020, against the autocratic President Aliaksandr Lukashenka. As the leader of the Belarusian democratic movement, she has met with world leaders, gathering support and advocating for the release of 1000+ political prisoners and a peaceful transition of power through free and fair elections.

“Any person knows that all great victories start with small steps. There are millions of ordinary Belrusian women and we stand together. In 2020, when women peacefully marched for ending the regime, we were abused, we were beaten and we were locked up. But we didn’t stop because our love for our families, for our children, and our country makes us invincible. The dictator acts out of hatred. We do it for love,” said Tsikhanouskaya. “I perfectly understand that this wonderful award is not for me. It belongs to every brave Belarusian woman fighting against the dictatorship for a better future. This award belongs to Belarusian women who refuse to give up, even when they are under threat, or even in prison. Today, I want to say how proud I am to be one of the millions Belarusian women. I am sure that our greatest reward is yet to come.”

The awards were presented by Silvana Koch-Mehrin, WPL Founder and President.

“These are women who make the path free for other women who become role models. There’s this saying ‘you can only be what you can see’ and it’s especially true for the highest positions in politics. The WPL Trailblazer Award is for those women who have made it and are currently in the highest positions; Head of State or Head of Government. We have been honored, over the years, to be awarding these awards to these outstanding women,” she said.

About Women Political Leaders
Women Political Leaders (WPL) is the global network of women politicians. The mission of WPL is to increase both the number and the influence of women in political leadership positions.WPL communities are women in political office – Presidents, Prime Ministers, Cabinet Ministers, Members of Parliaments.  WPL strives in all its activities to demonstrate the impact of more women in political leadership, for the global better. To accelerate, women need three things: communication, connection, community.  At  WPL, optimising the power of communication and connection builds new communities of knowledge for women political leaders everywhere. WPL believes that progress happens by convening women political leaders who have the drive and the influence to create positive change.  WPL is an independent, international, post-partisan and not-for-profit foundation based in Reykjavik, Iceland (the world champion of gender equality). Silvana Koch-Mehrin is the Founder and President of the WPL Foundation.