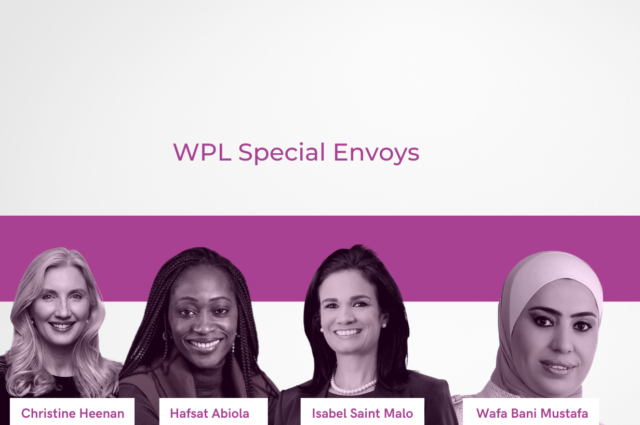 Comprising high-level women leaders from across diverse sectors, WPL Special Envoys will act in close cooperation with the Board to further advance the organisation’s mission of increasing the number and influence of women in political leadership positions. The WPL Special Envoys will provide strategic guidance and support to help forge close and effective relationships with partners and international stakeholders.

“I am honoured to join as WPL Special Envoy to Latin America and to continue efforts to promote women to the highest levels of representation in politics, academia, and all sectors of society. If we aspire to achieve the Sustainable Development Goals faster, we must fully include women in the effort.”

Wafa Bani Mustafa, Chairperson of the Coalition of Women Members of Parliaments from Arab Countries to Combat Violence against Women, Member of the Jordanian Parliament (2010-2017) , Special Envoy to Arabia.

“Empowering women and girls to be influential powerful leaders remains and will always be my passion, as I believe that it is not an option and a choice for women to take part in political life. It is a necessity and a duty to achieve sustainable development and democracy.”

“What we see in the world now is not how it would be if women shared decision-making equally with men. I am honoured to be working with the WPL movement to put the women’s agenda in the forefront, to ensure that our priorities shape the future.”

“As has been powerfully and painfully underscored throughout the global pandemic, who leads governments at all levels matters: it really matters. Women leaders have demonstrated extraordinary aptitude for driving progress as well as responding to crises, and it will take more women leaders and diverse perspectives if we are to achieve the Sustainable Development Goals. I am honoured to serve WPL in its efforts to lift up and support women leaders and inspire the next generation of governors, prime ministers, and presidents that the world needs.”

“Their strategic guidance and support will ensure that Women Political Leaders’ mission to advance parity between men and women is given adequate prominence in different areas of the world. The WPL Board looks forward to working with them to ensure that post-COVID-19 recovery plans are guided by a common scope: to build forward a society in which women’s perspectives are a crucial part of decision-making.”

WPL is also pleased to announce the addition of Katja Iversen as an Executive Advisor to WPL. Ms. Iversen has a background at the UN, at NGOs, and as an advisor to multiple Heads of State, Fortune 500 companies, and other organisations on matters of sustainability, health, and gender equality. She will work closely with WPL senior leadership on strategic partnerships and strategy development, supporting the continued growth of the organisation on a part-time basis.

“WPL has worked wonders,” said Ms. Iversen, “and I am thrilled to advise the organisation in its next phase to reach new heights. Getting more women into leadership and having a big, strong, and influential network of Women Political Leaders is key if we want a more just and sustainable world for all.”

About WPL
Women Political Leaders (WPL) is the global network of women politicians. The mission of WPL is to increase both the number and the influence of women in political leadership positions. WPL members are women in political office – Presidents, Prime Ministers, Cabinet Ministers, Members of Parliaments, Mayors.

About Isabel de Saint Malo
A former Vice President of the Republic of Panama and Minister of Foreign Affairs, Isabel de Saint Malo has over 30 years of experience in consulting, development, and implementation of public policies in Latin America. In 2014 she became the first woman to be elected to the Vice Presidency in Panama, as well as the first woman appointed Foreign Minister. In her capacity as Vice President and based on her government’s priorities, she chaired the Social Cabinet (“Gabinete Social”) and led the National Council for Development (“Concertación Nacional para el Desarrollo”), from which posts advancement of the SDGs have been promoted, including at the UN by way of Panama’s voluntary SDG progress report. In recognition of Ms. de Saint Malo’s contributions to building national consensus across two decades, she received the 2012 Woman of the Year award from the Panamanian Business Executives Association (APEDE) – the first person in Latin America to receive that honour. Currently, she is Senior Advisor to UNDP Administrator Achim Steiner in Development Strategy and Policy, as well as the UN Women Ambassador for Innovative Finance with a Gender Lens.

About Wafa Bani Mustafa
Entering the Jordanian Parliament as the youngest elected MP in 2010, and the first woman to head a bloc in that legislative body, Wafa Bani Mustafa served three subsequent terms (2010-2017) and was a founding member of the Arab Regional Parliamentary Forum and the Population and Climate Parliament Network. Throughout her career, Ms. Bani Mustafa has both launched and served on committees to propel women’s rights in Jordan and throughout the Middle East. Aside from tackling women’s empowerment, she has worked regionally and globally on human rights issues in general, and on youth issues in particular, helping to craft legislative amendments that benefit women and advocating civil rights for the children of Jordanian women married to non-Jordanians; she called for amendments to the Residency and Foreign Affairs Law to grant residency for the children of Jordanian women married to non-Jordanians. She has also lobbied for inclusion of an article in the Penal Code to criminalise acts of sexual harassment, and for the elimination of Article 308, which waives charges against a rapist if he marries his victim.

About Hasfat Abiola
A committed humanist, Hafsat Abiola is President of the Women in Africa Initiative, the foremost platform organising the African continent’s leading women into a force for sustainable development. She is an economist, educated at Harvard and Tsinghua; a pro-democracy activist who lost both parents to Nigeria’s struggle for democracy; and a former member of her state cabinet in charge of trade and investment portfolios and attainment of the MDGs. Ms. Abiloa believes firmly that women’s equal engagement in the economy and in governance systems at all levels will lead to a better world. She is one of 50 councillors at the World Future Council and a member of the BMW Foundation’s Responsible Leaders Group, Vital Voices 100, and the World Economic Forum’s Young Global Leaders alumni community. She is also the recipient of several global and national awards, including the U.S. National Civil Rights Museum Award in 2019.

About Christine Heenan
Christine Heenan serves as Flagship’s senior partner and Chief Communications Officer, overseeing communications, external affairs, and branding and marketing for Flagship and its enterprise companies. She also serves as an advisor to dozens of Flagship-founded companies within its broader ecosystem. She is the founder and former President of the Clarendon Group, a consulting firm focused on social impact, communications, advocacy, and leadership voice. While at Clarendon she advised clients including the Bill and Melinda Gates Foundation, the Broad Institute, the Whitehead Institute, the Social Science Research Council, CARE USA, the University of Miami, the Rockefeller Family Office, philanthropist Donald Sussman, and other notable organisations, leaders, and philanthropists. She also served as Senior Vice President for Global Policy & Advocacy at The Rockefeller Foundation, where she led the Foundation’s policy, program influence, partnerships, and communications teams, as well as its regional teams in Asia, Africa, and Italy. While at Rockefeller, Ms. Heenan led the creation of #Solvable, a global platform for highlighting the UN SDGs featuring more than 45 mini-films, an acclaimed podcast, and an award-winning documentary film. During the Clinton Administration, she served in the White House as a Senior Policy Analyst and speechwriter, focused primarily on health-care policy, women’s issues, and other areas of domestic policy.

About Katja Iversen
Katja Iversen is an executive advisor, author, and leading global advocate on sustainability, gender equality, and women’s health and leadership. She is the former President/CEO of Women Deliver and today holds various board and advisory roles, including with Women Political Leaders, UNILEVER’s Sustainability Advisory Council, King’s College, the Global Goals World Cup, and others. She has worked with the UN Secretary-General and various heads of UN Agencies on inclusion of a gender lens in the UN’s COVID response and recovery plans. Ms. Iversen was a member of French President Macron’s and Canadian Prime Minister Trudeau’s G-7 Gender Equality Advisory Councils, and an advisor to the Clinton Global Initiative and the MIT Solve Women & Tech Leadership Group. She has also trained Fortune 500 executives in cross-cultural management. A native of Denmark, Ms. Iversen was an original member of 100Women@Davos and was recently named Dane of the Year, and included in Apolitical’s Top 20 Most Influential People in Gender Policy. She has collaborated with Women Political Leaders since its founding and has spoken at the Reykjavík Global Forum several times.