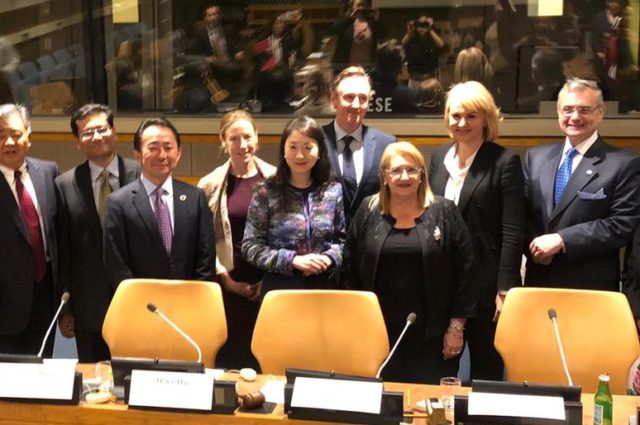 Blockchain represents an opportunity to change the world, by introducing transparency and accelerating poverty reduction. That was the shared belief held by speakers at the event, ‘Blockchain for Social Good: Utilizing Blockchain to Aid Economic Development’, held during the 73rd United Nations General Assembly in New York on the 24th of September. The consensus among speakers was that blockchain holds potential for the development especially of frontier and emerging markets.

During the event, co-hosted by the Women Political Leaders Global Forum (WPL), the Blockchain Charity Foundation (BCF), and the Finance Centre for South-South Cooperation (FCSSC), technology experts and government representatives from around the world aimed to explore the important value of blockchain technology and the possibilities for blockchain to be a strong driver for inclusive growth.

WPL has pursued this topic because of its belief that women politicians have an opportunity to play an important role in understanding and driving the crucial role of blockchain for future social and economic development.

“Blockchain technology is placing a spirit of trust and solidarity at the core of our socio-economic interactions,” said Marie-Louise Coleiro Preca, President of Malta and Member of WPL’s Global Advisory Board, “thereby boosting transparency, and emphasising the importance of an economy, and a society, which is built upon trust.” In other words, blockchain can be a catalyst to transform the way in which charitable and social organisations will be created and regulated in the future.

According to Helen Hai, Goodwill Ambassador of the United Nations Industrial Development Organization (UNIDO) and Head of BCF, blockchain technology represents a source of job creation and economic growth, and is a key to achieving the Sustainable Development Goals.

As pointed out by Jorge Chediek, Envoy of the United Nations Secretary-General and Director of the UN Office for South-South Cooperation (UNOSSC), blockchain technology could act as a game changer, having a massive impact on economic development to build a better world.

BCF and the United Nations Development Programme (UNDP) recognised the importance of this technology to construct a better society and, during this event, announced their partnership to support the work of blockchain for social good.