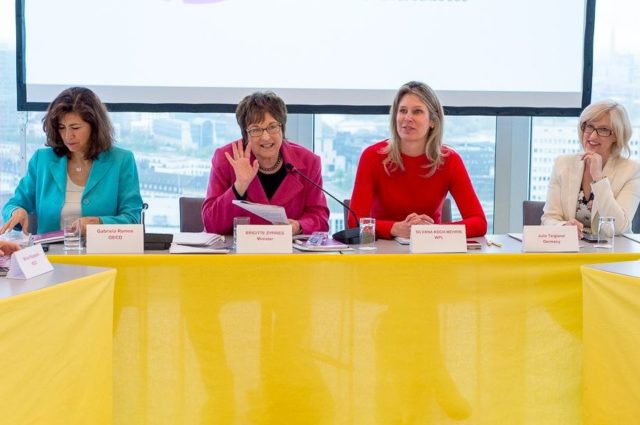 The G20 Digital Ministers Conference convened for the first time the G20 Ministers responsible for the digital economy during the 2017 German G20 Presidency.

On the margins of the G20 Digital Ministers Conference, the Women in Parliaments Global Forum (WIP) brought together female Parliamentarians from G20 countries in an exclusive roundtable discussion.

The WIP G20 Roundtable “Digitalisation: Policies for a Digital Future”, which was co-hosted by Women20 (W20) and had the support of EY, took place on 5-6 April in Düsseldorf.

The keynote speaker of this high-level session was the German Federal Minister for Economic Affairs and Energy, Brigitte Zypries. Zypries brought the outcomes of the high-level roundtable to the attention of the G20 Ministers

The session gathered a group of selected high-level women political leaders from G20 countries and guest countries to the German G20 Presidency, to discuss about: Multi-Stakeholder Conference on the Digital Economy

The selected Parliamentarians were also invited to attend the “Multi-Stakeholder Conference on the Digital Economy“, hosted by the German Ministry for Economic Affairs and Energy, on 6 April.

The Women Political Leaders Global Forum (WPL) is the international network of female politicians. Its mission is to increase both the number and the influence of women in political leadership positions. In co-operating with W20, women political networks as a fundamental tool to achieve equitable representation are further strengthened.

W20 is the G20 network which promotes women’s economic empowerment as an integral part of the G20 process through specific recommendations for action, advocacy and expertise. W20 mainstreams equal participation into the G20 process as a principle of sustainable economies. Digital inclusion is one of the three pillars W20 focus, together with labour market and financial inclusion.