On the eve of the G20 Digital Ministers Conference, the Women Political Leaders Global Forum (WPL) and Women20 (W20), convened a group of women political leaders from G20 countries in a high-level roundtable discussion. The German Federal Minister for Economic Affairs and Energy, Brigitte Zypries, was the keynote speaker. 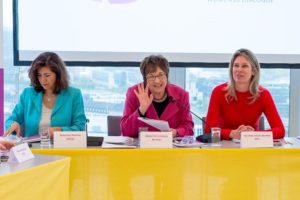 The G20 Digital Ministers conference has convened for the first time the G20 Ministers responsible for the digital economy during the 2017 German G20 Presidency. On the eve of this G20 Digital Ministers conference, the Women Political Leaders Global Forum (WPL) brought together female leading politicians from G20 and guest countries (Argentina, Australia, Belgium, Brazil, Germany, Indonesia, Italy, Japan, Mexico, Norway, Russia, Saudi Arabia, Singapore, Turkey and UK) in the high-level roundtable discussion “Digitalisation: Policies for a Digital Future”, in Düsseldorf (5-6 April). The event was co-hosted by Women20 (W20), an official engagement group of the G20, and supported by EY.

Brigitte Zypries, German Federal Minister for Economic Affairs and Energy and host of the G20 Digital Ministers conference, brought the Outcome Declaration of the WPL-W20 roundtable to the attention of the G20 Ministers. “Digitalisation is key to the future of our societies as digital transformation has embraced all areas of our lives. We will host the first G20 Digital Ministers in order to put digitalisation on the agenda of international politics,” Zypries explained.

“I am glad that the issue of digitalisation will also be addressed in Dusseldorf by WPL, as we need to increase the number of women in leading positions, as founders and as entrepreneurs,” the Minister added. “If we don’t, we will miss out on a lot of economic potential and, of course, a lot of creativity!”.

The session focused on identifying the major drivers transforming the digital economy and digital society. The central question was: how should women political leaders steer the process?

W20 promotes women’s economic empowerment as an integral part of the G20 process through specific recommendations for action, advocacy and expertise. It mainstreams equal participation into the G20 process as a principle of sustainable economies. Digital inclusion is one of the three pillars W20 focuses on, together with labour market and financial inclusion.

WPL is the international network of female politicians. Its mission is to increase both the number and the influence of women in political leadership positions. In co-operating with W20, WPL strengthens women political networks, a fundamental tool to achieve equitable representation

Silvana Koch-Mehrin, WPL President and Founder: “We want more women at the forefront of digital innovation. Women politicians want to and can play a decisive role in shaping the digital future. To accelerate, women need three things: communication, connection, community; these are the main elements WPL works for.”

Mona Küppers, W20 Germany Co-Chair and President of the National Council of German Women‘s Organizations (Deutscher Frauenrat): “Good governance depends on an active, self-confident and strong civil society and civil society can only flourish when enabled by a responsive government.”

According to Küppers, “W20 is not supposed to be a token side-show. We seek to make the W20 a constant and integral engagement group. And therefore, G20 has to establish binding and measurable goals and a comprehensive monitoring system.”

Stephanie Bschorr, W20 Germany Co-Chair and President of the Association of German Women Entrepreneurs (VdU): “We have to develop the full potential of digitalisation by recruiting women and girls as active designers of this future-oriented industry and close the digital divide.”

Gabriela Ramos, OECD Sherpa to the G20 and Special Counsellor to the OECD Secretary-General: “The OECD has been developing a unique whole-of-government approach on how best to respond to digital transformation of economies and societies, including addressing the gender digital gap.  Women are less attracted to STEM disciplines and more at risk of being left behind in the digital economy. This is not because of their abilities but because of stereotyping, attitudes and social biases. So it is time for leaders to take all the steps and policy actions needed to ensure girls and women are well equipped to deal with the digital world.

W20 also presented the studies ‘Effects of digitalisation on gender equality in the G20’ (prepared by the Kiel Institute for the World Economy) and ‘Bridging the gender digital access gap’ (prepared by Betterplace lab). The studies focus on the barriers to access and use of ICT for women, the impact of digitalization on the future of women’s work and financial inclusion. They provide recommendations for policy measures and initiatives in G20 countries aimed at reducing the gender digital divide.