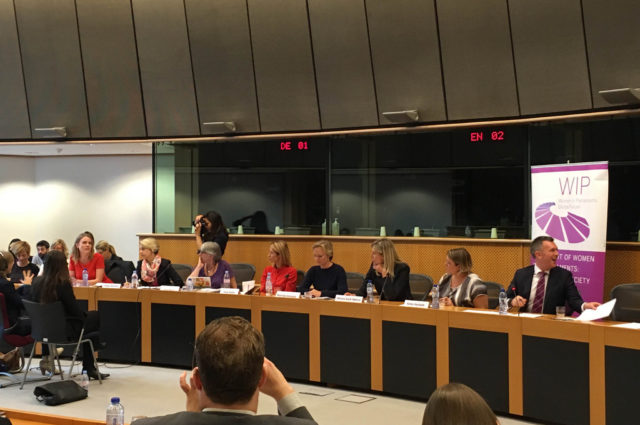 Women in Parliaments, in collaboration with Harvard University and Facebook, launched the cutting-edge report, “Social Media: Advancing Women in Politics?” at the European Parliament, on October 11. The event was hosted by MEP Martietje Schaake.

The report is the first of its kind as it is based on a survey that examined the use of social media by over 900 female Parliamentarians from 107 countries. The study looks at how female politicians use social media to launch and maintain successful political careers. Only 22.8% of national members of parliament are women, and there are still 38 countries in the world with parliaments in which men account for more than 90% of its members.

At the event, there was an interesting dialogue about the use of social media by female Parliamentarians where a number of members of the European Parliament expressed thoughts on the report and topic. Six MEPs, including Kaja Kallas, Mairead McGuinness, Terry Reintke, Marietje Schaake, Helga Stevens and Julie Ward, participated in the informative discussion moderated by Brian Maguire from EurActive. Silvana Koch-Mehrin, Founder of WIP, and Katie Harbath, Global Politics and Government Outreach Director at Facebook, also participated in the discussion.

“This study confirms that social media are a political equaliser. They are a resource with an incredible political impact, and unlike other resources (such as campaign financing, professional networks or traditional media coverage), they have a very low entry cost”, said the Founder of WIP. Harbath added: “Facebook and other social media platforms are transforming the way politicians connect with citizens and campaign on the issues they care about. But this survey also shows how social media is breaking down the long-standing barriers faced by women in politics by levelling the playing field and helping them succeed in the jobs they’ve been elected for”.

MEP Julie Ward pointed out that the use of this medium is groundbreaking in politics because “women have found themselves a space via social media to express themselves – a space that was not available to previous generations”.

The dialogue also revealed the equalizing opportunities social media creates for constituents. Stevens said that social media is a level playing field for those with disabilities – for example, deaf constituents can individually communicate their thoughts and opinions without additional assistance.

The online violence against women in politics was also addressed during the session. “It is important for social media and those who moderate social media to find a balance between hate speech and free speech”, highlighted Schaake.

This report will be presented in Rome on Tuesday, October 18, at an event hosted by the Vice-President of the Italian Senate, Linda Lanzillotta. The speakers include the following: Linda Lanzillotta, Vice-President of the Italian Senate and Member of the WIP Executive Board, Anna Maria Bernini, Member of the Senate, Anna Ascani, Member of the Parliament, Roberta Maggio, Head of Digital Communication, President Matteo Renzi, and Sara Ranzini, Communication Director, Facebook Italy.

Additionally, this report will be presented in Mexico City on November 23. This presentation at the Mexican Senate will be hosted by Lucero Saldaña, Member of the Senate and WIP Executive Board Member.

To access our report, please read it here: http://bit.ly/2eohuFW