Launch of the #UpForSchool Campaign in London 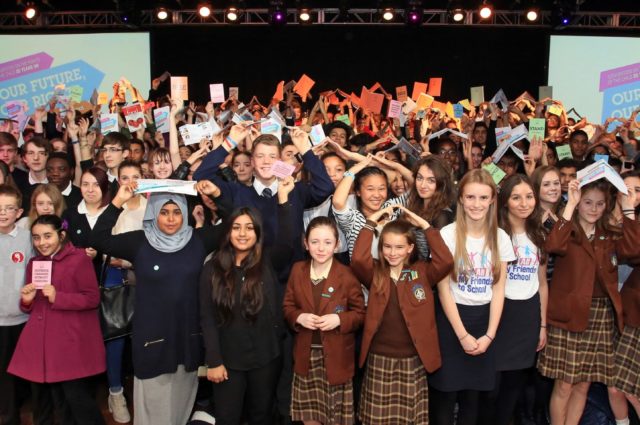 On 19 November, WIP joined ‘A World at School’, the Nobel Peace Prize Laureate, Kailash Satyarthi, and hundreds of schoolchildren to launch the global campaign #UpForSchool in London.

The event “Our Future, Our Rights” was introduced by Gordon Brown, former Prime Minister of the United Kingdom and UN Special Envoy for Global Education, who claimed for the right of every child to receive an education, which is the main goal of the #UpForSchool campaign.

The children’s rights advocate and 2014 Nobel Peace Prize Laureate Kailash Satyarthi, shared his experiences on rescuing children from trafficking and slavery in India and other countries, during the event. “Every child has the right to be free and to be educated,” Satyarthi insisted while pointing out that “the denial of the right to learn is a form of violence”.

Today, 25 years after the Convention on the Rights of the Child was adopted, still 58 million children are out of school. Kainat Riaz and Shazia Ramzan, who were attacked together with Malala Yousafzai in Pakistan, explained how they were targeted for being girls who wanted to go to school. Kainat, 17, said: “When a girl is given the right to an education then she has options for her future. This is what I hope to have for myself”.

WIP is a lead partner for the global call for universal primary education #UpForSchool. Please sign the petition today.