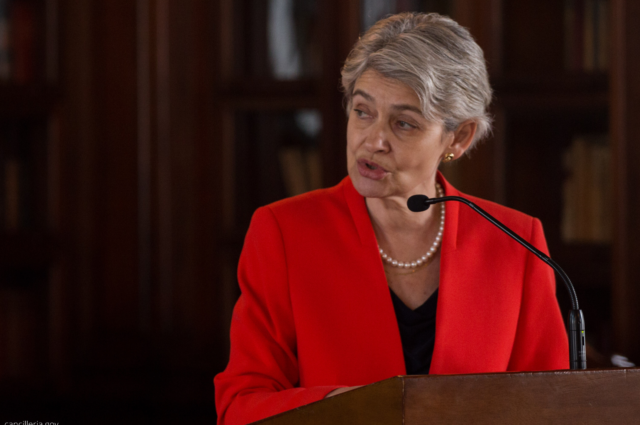 In honor of the second annual International Day for Multilateralism and Diplomacy for Peace, WPL looks to the world’s amazing women leaders, who are experts in the field of diplomacy, multilateralism, and peacekeeping, to guide the global community in advancing multilateralism, women’s equality and peacebuilding efforts. Irina Bokova, the Director General of UNESCO (2009-2017), highlights the need to address the underlying weaknesses of multilateral structures, which have been ignored for too long because the international community assumes that globalisation and multilateralism go hand in hand.

This year’s International Day of Multilateralism and Diplomacy for Peace is marked in the midst of the worst crisis since the Second World War and the establishment of the United Nations 75 years ago, with unprecedented political, economic, social, and humanitarian consequences.  I hesitate to say “celebrate” instead of ‘mark”, as the Covid-19 pandemic, with its huge human suffering and disruptive impact, is sending unprecedented, in recent history, shockwaves to multilateralism that is struggling to keep the trust and confidence of people. It is equally sending shockwaves to the global economy and challenges policies, rules, and governance.

Not least, it is the biggest threat to international peace and security, although, unfortunately, not recognized as such by the UN Security Council. This was the reason for our Group of Women Leaders for Change and Inclusion, comprised of more than 40 former high-ranking women from the UN system, to address a letter to the President of the UN Security Council urging its members to act and thus send a strong message of its relevance to the world.

Multilateralism was already under pressure and the Covid-19 crisis is weakening it further. Already confronted with protracted conflicts that it cannot stop and with the increasingly complex challenges of modernity, the multilateral order is facing a pandemic that is shaking up all the paradigms of globalization.

One would think that globalization will be strengthening multilateralism, but the reality is just the opposite. Instead, what we see is an increasing political fragmentation and an attempt to go back behind national borders to seek solutions. The Covid-19 crisis shows us that when we need multilateralism most, it is withdrawing from the global scene. The Covid-19 crisis therefore brought to light the powerlessness of multilateralism where the very characteristics of this pandemic called for enhanced international cooperation.

Women are the big losers in all this. It was multilateralism and the United Nations that gave women a voice globally and put women’s rights on the political agenda. Women’s agendas permeate the UN 2030 Agenda for Sustainable Development.  With the looming global economic recession and its heavy social consequences, such as rising inequalities and surge in poverty,  the world may lose decades of achievements in ensuring a sustainable path to development and gender equality.

The important anniversaries this year invite us more than ever to look at the deepening crisis of multilateralism, aggravated by the Covid-19 pandemic, through the women’s lens. Decisions of Governments and financial institutions to mitigate the disastrous economic impact of the crisis should make all efforts so that it is not again women who suffer most, go back into poverty, be subjected to violence, lose their educational and job opportunities in the midst of rising inequalities, as we have seen in the aftermath of the 2008 financial crisis. The crisis we are confronting now is more severe with much deeper long-term consequences. And for the most vulnerable communities, it is a crisis within a crisis.

The Covid-19 pandemic and, more importantly, its aftermath are therefore a test for multilateralism. Is it capable of taking the lead in the international mobilization that the very nature of the pandemic clearly requires and of shaping a role that meets the health, economic and geopolitical challenges that this crisis will bring about? Is it capable of retaining the 2030 Agenda for Sustainable Development with its ambition to leave no one behind as well as the Paris Climate Agreement as its prime political ambition?

But the biggest test for multilateralism is the ability to uphold the achievements and commitments to women’s rights and women’s empowerment – the most important agenda for the 21st century, which focuses everything the United Nations stands for – maintaining peace, upholding human rights and dignity, fighting climate change and sustainable development. It will not come automatically. It needs leadership and conviction, but it will regain the trust and relevance of multilateralism.