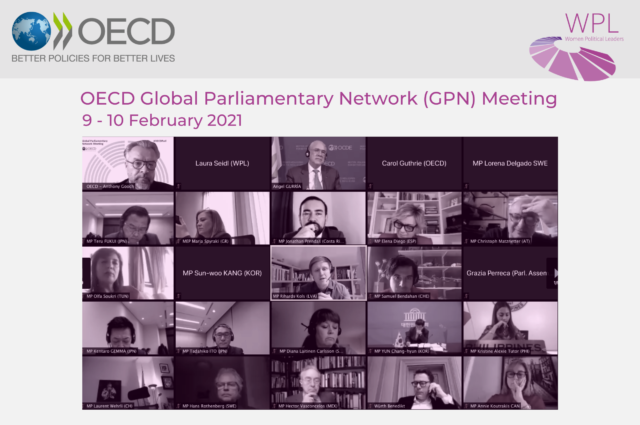 Forging a New Consensus for Economic, Social, and Environmental Progress

Participating in the first session of the meeting was Angel Gurría, giving his final remarks as Secretary-General of the OECD.

Although the spotlight is currently focused on the global and equitable distribution of vaccines as a major front in combating the virus, many poorer countries are being left behind. European nations and others have distributed vaccines to millions of citizens, while less wealthy nations have yet to initiate vaccination programs. At present, some 80% of the vaccine supply remains in the hands of just ten countries. Governments must work together to ensure universal, rapid, and equitable access. As the Secretary-General observed, “If we do not recover together, we will all suffer together.”

The Path to a Sustainable and Inclusive Recovery

While the introduction of vaccines has offered a glimpse of light at the end of the tunnel, the onset of cold weather, the emergence of novel variants, and the complicated logistics of vaccination campaigns are factors demanding continuous consideration.

According to Eva Lindh, Member of Parliament of Sweden, when discussing how to achieve an inclusive recovery, the gender dimension is crucial. Women face greater income inequality, greater risk of unemployment, and increased violence, and their inclusion into the labour market could boost the overall GDP of OECD countries by more than $6 trillion. As Ms. Lindh pointed out, “Gender inequality is a question of economics; when more women work, economies grow.”

Annita Demetriou, Member of Parliament and WPL Country Ambassador of Cyprus, also spoke to the topic of recovery, placing emphasis on the move to a green economy. Cyprus has initiated plans to accelerate and boost climate neutrality, among which Ms. Demetriou highlighted “improving the penetration of renewable energy sources into the energy mix, promoting sustainable transport, enhancing the resilience and competitiveness of the economy, and up-skilling the workforce to adapt to the new needs of the labour market in the context of the green and digital transition.”

Co-operating on Vaccines: What We Must do Next

Another session, held on 10 February, discussed the necessary next steps for the logistics of vaccine implementation. It was noted that at least four highly effective vaccines have been created in a year’s time, thanks to international collaboration and the strong global need to combat the virus. Although this is clearly a tremendous success story, challenges around implementation still linger.

While many countries in the European Union have successfully launched their vaccination programs, unequal access to distribution has emerged among smaller EU states. Adele Tonini, Member of Parliament of San Marino, participated in a discussion on how her country has struggled to handle the pandemic. With an average population of just 33,000, San Marino has only one hospital, and because the surrounding nation of Italy was so brutally affected, San Marino could not rely on hospitals beyond its borders. Thus Ms. Tonini stressed the priority of frontline workers as well as vulnerable populations in receiving COVID-19 vaccines.

Maryam Majid Bin Theneya, Member of Parliament and WPL Country Ambassador of UAE remarked how her country has fostered a process of healing from the pandemic. According to Ms. Theneya, the UAE has “made vaccines widely available, ensured their sustainability and quality, and raised awareness of their importance, while supporting innovation and research.”

Implications and Lessons from COVID-19 Waves: Resilience of Health Systems

This second session held on 10 February considered at length the fragility and adaptability of healthcare systems, as revealed during the pandemic. Now is the time to invest in equitable access, both to protect society and to boost economic activity.

Inaya Ezzeddine, Member of Parliament and WPL Country Ambassador of Lebanon, spoke of fragilities within the healthcare system that has exposed rampant inequalities. According to Ms. Ezzeddine,

“We have to go back to deal with health as a human right, not a commodity. Health is not only about illness, but also about wellness, and for this I think we need to talk about prevention, protection, and promotion of health.”

Gabriela Cuevas Barron, Member of Parliament of Mexico and Co-Chair of UHC2030, focused on making universal healthcare coverage a reality throughout the world.

“We are experiencing a tragic pandemic, but we need to understand that this is happening more often. We need to be prepared. If we had access to treatment for all, the results of this pandemic would have been very different.”

Impact of the Pandemic on Mental Health

This final session of the two-day meeting discussed the deterioration of mental health across most countries following the outbreak. While anxiety and depression have sharply increased during the pandemic, high reported increases in mental distress have especially affected youth, unemployed persons, and those facing financial insecurity. The consequences of poor mental health are more apparent than ever, and strong economic recovery will certainly depend on the quality of support in mental health services.