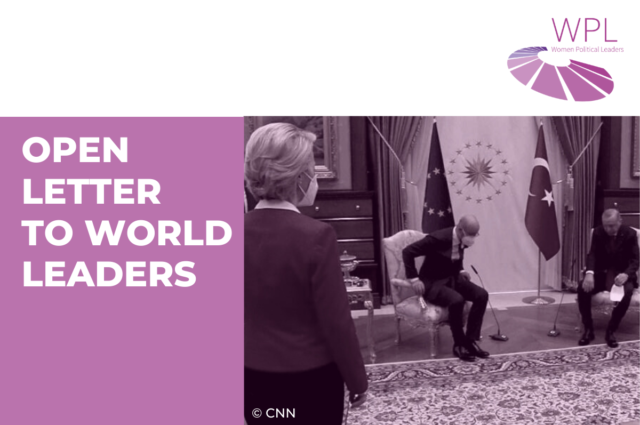 It is estimated that it will take 145.5 years to attain parity between men and women in politics. Not only is women’s access to entering politics around the world hindered by structural, socioeconomic, institutional, and cultural barriers, but also those who have managed to break the political glass ceiling can be confronted with yet more barriers once in high office. The #SofaGate incident sadly reminds us that leadership is still considered a men’s game.

Today, despite the many achievements made by women in decision-making positions, a culture of distrust in and lack of respect for their capabilities still persists. Evidence provided by the Reykjavík Index for Leadership indicates that society has not become much more progressive in how it views women’s suitability for leadership roles.  This creates a significant challenge for women leaders around the world. Parity is not just about numbers; it is also about influence. Even after reaching the top, women leaders can still be distanced from the centre of action. What better way to understand this issue than to see the woman President of the European Union Commission side-lined while two male leaders “talked politics and policy”?

It is high time to get rid of harmful stereotypes, change the image of the leadership roles which continues to be centred around men, and ensure mutual respect and equality between men and women in the political and decision-making arenas. We need male leaders working as allies and agents of change to dismantle perceptions of prejudice, and not to perpetuate them.

To women leaders, as stated by Congresswoman Shirley Chisholm already some 50 years ago, the advice still holds:

“If they don’t give you a seat at the table, bring a folding chair.”

Rosalía Arteaga – Executive President of the FIDAL Foundation; President of Ecuador (1997); Member of the WPL Board.

Jewel Howard-Taylor – Vice President and President of the Senate of Liberia; Chairperson, Senate’s Health and Social Welfare Committee on Gender, Women and Children, Liberia; Member of the WPL Board.

Nurhayati Ali Assegaf – Vice Chairwoman of the Democratic Party (Partai Demokrat) of Indonesia; President of Geneva Council for International Affairs and Development (GCIAD); Member of Parliament, Indonesia (2004-2019);  Member of the WPL Board.

Anna Kostanyan: Member of the National Assembly of the Republic of Armenia.

Annita Demetriou: Member of the House of Representatives, WPL Country Ambassador of Cyprus.

Åslaug Sem-Jacobsen: Member of the Parliament of Norway, WPL Country Ambassador of Norway.

Barbara Creemers: Member of the House of Representatives of Belgium.

Eeva Kalli: Member of the Parliament, Chair of the Network of Finnish Women Members of Parliament (2020-2021)

Fernanda Elena San Martin Carrasco: Member of the Chamber of Deputies of Bolivia.

Gabriela Morawska-Stanecka: Deputy Speaker of the Senate of the Republic of Poland, WPL Country Ambassador of Poland.

Ingjerd Schou, Member of Parliament, Norway, Vice-President of the Storting, Head of the Norwegian delegation to the Parliamentary Assembly of the Council of Europe (PACE)

Ingrid Leary: Member of the House of Representatives of New Zealand; Co-Chairperson for the 53rd Parliament for Women on the National Party; WPL Country Ambassador of New Zealand.

Lesia Vasylenko: Member of the Verkhovna Rada, Parliament of Ukraine.

Lina Lopes: Member of the Parliament, Chairwoman of the subcommittee on equality and non-discrimination, WPL Country Ambassador, Portugal

Lucero Saldaña: Member of the Chamber of Deputies of Mexico.

Marilou McPhedran: Member of the Senate, WPL Country Ambassador for Canada, Co-Founder of The Canadian Association of Feminist Parliamentarians.

Masai France: Member of the Senate of Belgium.

Viviane Teitelbaum: Member of the Parliament for the Brussels Region, Vice-President of the Francophone Parliament of Brussels; President, Feminist Observatory of Violence against Women.