President Vigdís: “Icelandic women are role models in the world, and we have to live with that” 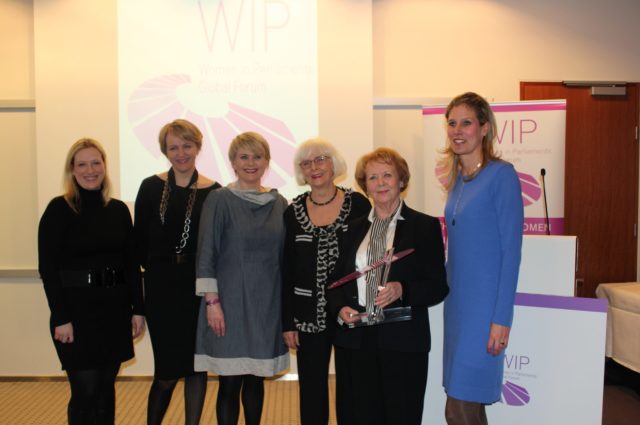 Vigdís Finnbogadóttir, the first elected female Head of State in the world, has received the “WIP Award for Lifetime Achievements in Female Political Empowerment” in Reykjavík.

The Women in Parliaments Global Forum (WIP) has gathered in Iceland during two days to discuss with local politicians about the country’s success in gender equality.

The former President of Iceland, Vigdís Finnbogadóttir, has received the WIP Award for Lifetime Achievements in Female Political Empowerment tonight in Reykjavík, during an award ceremony with female Parliamentarians from all around the world who met for the first time in Iceland. “The Icelandic women are role models in the world, and we have to live with that” said the woman who was the first elected Head of State in the world.

International female MPs, coming from more than 20 countries, have gathered in Reykjavík for a 2-days Study Trip organized by the Women in Parliaments Global Forum (WIP) and the Parliament of Iceland.

With the cooperation of the female Icelandic MPs and the 3 female Ministers, Eygló Harðardóttir, Minister of Social Affairs and Housing, Hanna Birna Kristjánsdóttir, Minister of the Interior and Ragnheiður Elín Árnadóttir, Minister of Industry and Commerce, the politicians have learned about the milestones that were key in Iceland to achieve the top position of the World Economic Forum’s Global Gender Gap Report.

Legislation like the 3-months of paid parental leave (since 2003) and the law which obligates companies to have a minimum of 40% of women or men in their boards since 2013, have been widely discussed with local politicians and with the female CEOs of the companies Rio Tinto Alcan, Actavis, Steinunn and Lýsi.

The Prime Minister, Sigmundur Davíð Gunnlaugsson and the President of Iceland, Ólafur Ragnar Grímsson, have received the Women in Parliaments Global Forum (WIP) during the Study Trip.

After this WIP Study Trip to Iceland, the Women in Parliaments Global Forum (WIP) will meet again in Rwanda, a country leader in female political empowerment, from 1 to 3 July 2014.