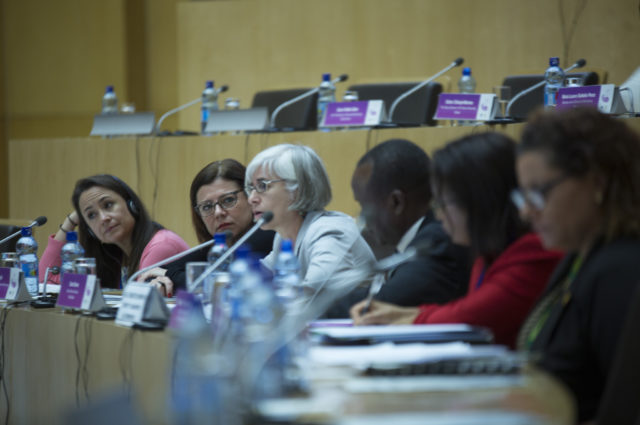 The WIP Mexico Summit is co-hosted by the Women in Parliaments Global Forum (WIP) and the Mexican Senate and will mark the 40th anniversary of the First World Conference on Women.

The Women in Parliaments Global Forum (WIP) Mexico Summit 2015 will gather female Parliamentarians from all continents for a 3-day conference that will analyze and celebrate the strides towards gender equality in politics, in a region that has more than doubled its number of female members of Parliaments over the last 20 years. The international politicians will exchange best practices on political action and changes in legislation to get more women into positions of influence and power. The MPs will also address pressing issues on the global agenda such as peace and security, trade, health, migration and the sustainable development goals.

The WIP Mexico Summit, taking place from 7 to 9 October, is co-hosted by the Mexican Senate. It will mark the 40th anniversary of the First World Conference on Women (Mexico City, 1975) under the global theme “Make it happen! Influence and power of women in Parliaments”. The list of confirmed speakers includes Enrique Peña Nieto, President of Mexico, Alicia Bárcena, Executive Secretary of ECLAC, Arancha González, Executive Director of the International Trade Center, Rebeca Grynspan, Ibero-American Secretary General, Caren Grown, Senior Director for Gender of the World Bank Group, and Geraldine Fraser-Moleketi, Special Envoy on Gender of the African Development Bank.

This will be the first time that the global network of female Parliamentarians –the Women in Parliaments Global Forum (WIP)- will gather for a global Summit in Latin America, after holding groundbreaking meetings in Europe (European Parliament – 2013) and Africa (Parliament of Rwanda – 2014, African Union Commission – 2015).

Mexico was selected to host the WIP Mexico Summit after joining the list of countries that have enshrined gender equality in politics directly in their highest legal text, the national Constitution. In 2014, Mexico passed an amendment to its Federal Constitution stating that political parties should put in place rules to ensure gender parity in the nomination of candidates in federal and local congressional elections. The amendment is the first of its kind in Mexico and has helped to reach a 39% share for women in the national Parliament (after the elections of May 2015).

If you wish to cover the WIP Mexico Summit 2015, please send the request indicating Name, Country and Media Outlet by the 30th of September.