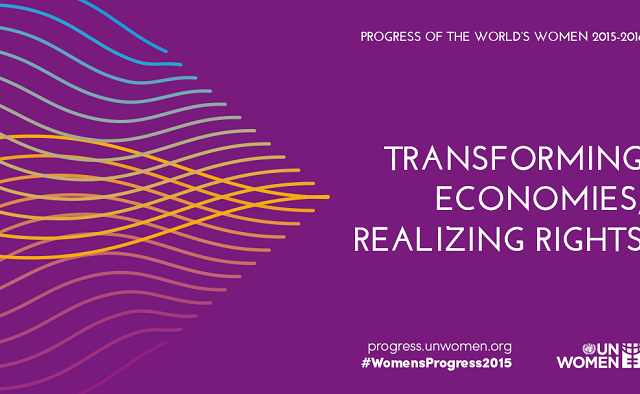 (London, 27 April, 2015) A major report from UN Women, released today in seven locations globally, brings together human rights and economic policymaking to call for far-reaching changes to the global policy agenda that will transform economies and make women’s rights, and equality, a reality. It takes an in-depth look at what the economy would look like if it truly worked for women, for the benefit of all.

Progress makes the case that the alternative economic agenda it outlines would not only create fairer societies, it would also create new sectors of employment, for instance in the care economy.

The report is being published as the international community comes together to define a transformative new agenda for sustainable development, 20 years after the landmark Fourth World Conference on Women in Beijing, China, which set out an ambitious agenda to advance gender equality.

Since the Beijing Conference, significant advances have been made by many societies, particularly in advancing women’s legal rights. However, as Progress shows, in an era of unprecedented global wealth, millions of women are still consigned to work in low paid, poor quality jobs, denied even basic levels of health care, without access to clean water and decent sanitation.

Globally, only half of women participate in the labour force, compared to three quarters of men. In developing regions, up to 95 per cent of women’s employment is informal, in jobs that are unprotected by labour laws and lack social protection.

Women still carry the burden of unpaid care work, which austerity policies and cutbacks have only intensified. To build fairer, more sustainable economies which work for women and men, a future comprising more of the same will no longer do.

“Our public resources are not flowing in the directions where they are most needed: for example, to provide safe water and sanitation, quality health care, and decent child- and elderly-care services. Where there are no public services, the deficit is borne by women and girls,” said UN Women Executive Director Phumzile Mlambo-Ngcuka.

“This is a care penalty that unfairly punishes women for stepping in when the State does not provide resources and it affects billions of women the world over. We need policies that make it possible for both women and men to care for their loved ones without having to forego their own economic security and independence,” she added.

Through solid, in-depth analysis and data, this evidence-based report provides ten key recommendations for actions that governments and others can take in order to move towards an economy that truly works for women, to the benefit of all.

Progress sets out a vision of a global economy fit for women, where they have equal access to productive resources and social protection, which provides them with sufficient income to support an adequate standard of living. In such an economy, the work that women do would be respected and valued; stereotypes about what women and men can and should do would be eliminated; and women would be able to work and live their lives free from violence and sexual harassment.

The reality, however, is very different.

Women are clustered into a limited set of under-valued occupations. For example, 83 per cent of domestic workers worldwide are women and almost half of them are not entitled to the minimum wage. Even when women succeed in the workplace, they encounter obstacles not generally faced by their male counterparts. For example, in the EU, 75 per cent of women in management and higher professional positions and 61 per cent of women in service sector occupations have experienced some form of sexual harassment in the workplace in their lifetimes.

An economy designed with women’s needs in mind would give them an equal voice in economic decision-making: from the way in which time and money are spent in their households, to the ways in which resources are raised and allocated at the national level, to how broader economic parameters are set by global institutions.

Women are still under-represented in economic leadership positions, from trade unions to corporate boards, from finance ministries to international financial institutions. Women’s membership in trade unions is growing in some countries, but they rarely reach top leadership positions. In 2014, across six of the most influential global economic institutions, women’s representation on their boards ranged from 4 to 20 per cent.

Through case studies and concrete examples of change from Bolivia to Botswana, Progress calls for a paradigm shift in the way governments, financial institutions, businesses and civil society approach economic policy thinking and human rights, to bring about an alternative economic agenda which places women and their rights at its centre.

“The new economic agenda that UN Women is advocating for is not a pipe dream. Many countries, including low-income developing countries, are already implementing elements of this agenda,” said Shahra Razavi, Chief of UN Women’s Research and Data Section and lead author of the report. “The kind of change we need is far-reaching, but it can be done.”

In its key recommendations, Progress underlines that with the right mix of economic and social policies, governments can generate decent jobs for women (and men) and ensure that the unpaid care work that goes into sustaining all economies is recognized and supported. Well-designed social services (e.g. health, care services) and social protection measures (e.g. pensions) can enhance women’s income security, from birth to old age, and enhance their capacity to seize economic opportunities and expand their life options.

Macroeconomic policies can and should support the realization of women’s rights, by creating dynamic and stable economies, by generating decent work and by mobilizing resources to finance vital public services. Governments need to go beyond the old metrics of GDP growth and low inflation, and instead measure success in terms of the realization of human rights.

Women’s economic and social rights – the right to a decent job, to health care and a life free from violence and discrimination – are guaranteed in human rights treaties, which almost all governments in the world have signed. Governments are ultimately responsible for delivering these rights, but they cannot do it alone. International financial institutions and the private sector are among the key players that shape the economy. They all need to be held accountable by civil society and the public, to play their part.