“Rebuilding Rwanda, How Women Are Leading the Way”, article by Donatille Mukabalisa, Hon Speaker of the Chamber of Deputies 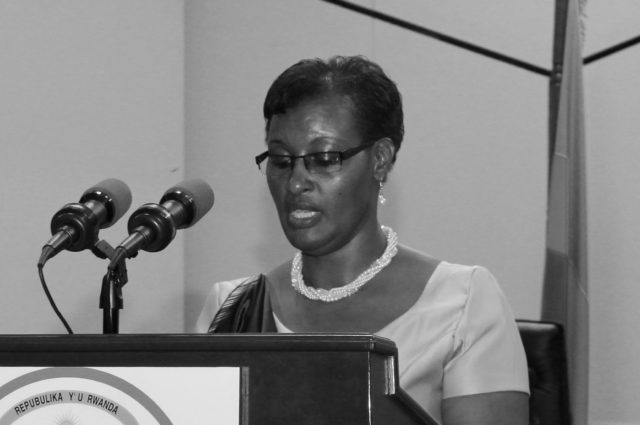 This last weekend, Rwanda was celebrated across the world on International Women’s Day for its achievements in representation of women in public life.

In Rwanda, this year’s celebrations were tinged with a particular poignancy as Rwanda commemorates Kwibuka20, the twentieth anniversary of the Genocide against the Tutsi on April 7th.

On this international day, it was important for us to take the opportunity to celebrate just how important women have been in rebuilding and leading Rwanda since the events of 1994.

In many ways, the rapid advance in gender equality in Rwanda was hastened by necessity. Of the survivors of the genocide, 70 per cent were women. They had no choice but to take the lead in healing a broken and fractured society. Rwanda needed everyone to come together to ensure an inclusive reconstruction process and guarantee that this would never happen again.

In formulating the 2003 constitution, it was decided that parliament must have a quota of at least 30 per cent for women. This has been easily exceeded in every election since. In September of last year, national elections in Rwanda saw women take 64 per cent of seats – the highest level of female representation of any country in the world.

In fact, Rwanda continues to be the only country where women make up a majority of parliament. And increasingly, women are being elected at the local level. In the most recent round of local elections women won almost half of district and Kigali City advisory posts.

The effects of a female-dominated parliament can be seen in legislation. Women now have the right to own land, property and to keep hold of their assets when they decide to marry. Inheritance laws have been changed so that property is equally split between children, regardless of gender.

Rape has been included in the genocide statute. The serious problem of gender-based violence has been tackled from every direction, including through legal reforms, police education, the creation of a free hotline for victims and heavy sentences for perpetrators. Every police station in Rwanda now has a dedicated “desk” to take reports of violence against women, as does the national army.

It is no coincidence that in 2012, a poll by Gallup showed that Rwanda is now considered by its residents to be the safest place for women to live in Africa.

As for healthcare, contraception is widely available and women know they have options and are free to choose. Even issues such as sex education and taxes on imported sanitary products now make it onto the political agenda.

We have also made girls education a priority. The number of boys and girls enrolled in Rwanda’s primary schools is almost equal.

We recognize that we also need to provide young girls with role models – women who are leaders, not only in the field of politics, but also business and technology. We have female pilots, entrepreneurs, taxi drivers and lawyers. We want every woman to know they can be whatever they want to be.

Over the last twenty years, women have used their skills and talents to improve their own lives and the lives of those around them. The fresh perspective they have brought to government has also led to positive economic reforms, a focus on innovation and a clampdown on corruption. Women played their part as one million Rwandans lifted themselves out of poverty between 2007 and 2012.

The quota system has clearly helped to speed up women’s participation in politics. But women have been so successful in proving that they can make a positive difference to peoples’ lives that we may reach a point where quotas are unnecessary.

Twenty years after the genocide, together women and men are forging a society without discrimination, bias or prejudice. This is what we celebrated on Saturday.

This article was published on the 14th of March in The Huffington Post; written by Donatille Mukabalisa, Hon Speaker of the Chamber of Deputies, Rwanda Parliament.