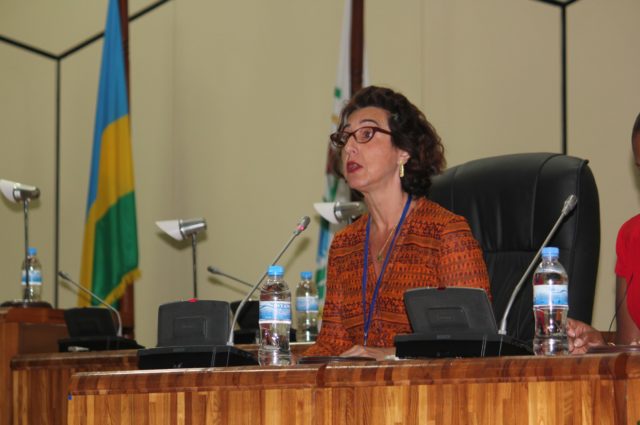 Having guarantees of women’s human rights in the constitution is essential: constitutional entrenchment is an important step toward ensuring that states eliminate gender-based discrimination and affirmatively advance women’s rights.

Last decades we have seen a new constitutionalism based on the principles of participation, openness, and inclusiveness. These key elements have opened the door for women’s participation in the constitution making processes.

In Africa in early 1990s, constitutionalism became a central focus of the wave of democratization set in motion by civil society. Constitution-making was also seen as a “powerful tool” for engaging the contentious issues of ethnicity, language, gender, accountability, social justice, difference and identity.

Since 1990 women’s participation in constitution-making processes across Africa has increased substantially. 38 African countries’ constitutions were re-written and six had major revisions. Some of the new constitutions were adopted in the negotiations for peace after major conflicts, while others emerged in the context of shifts toward multi-partyism and political opening.

Case studies of constitution-making processes from the 1990s onwards illustrate that women’s involvement significantly influences the regulative, constitutive and transformative aspects of constitution-drafting. Women’s voices influence the final contents, and raise awareness and discussion, especially on formerly taboo “private” issues. Such participation also empowers women by bringing those who may have been politically inactive into a nationwide discussion of society’s goals and values; and women’s participation adds to constitutional legitimacy.

The Constitution of the Republic of Rwanda was introduced in 2003 following approval by a referendum held on the 24th May 2003. Women’s groups played an important role during the extensive consultations held on the Constitution and lobbied for quotas for women in parliament and public office. The Constitution incorporates the principals of gender equality and the elimination of all forms of discrimination against women and provides a strong legal framework for mainstreaming gender.

Three things to take into account concerning gender and constitutions.

The electoral rules and procedures that determine which interest groups are represented on constitution-building bodies are critical for guaranteeing the role of women in the process of constitutional drafting, revision, and adoption.

These rules should be designed to overcome the traditional gender biases and power dynamics that undermine women’s participation in these contexts, such as women’s comparative social, economic, and educational disadvantage or the fact that post-conflict constitutional settlements often focus on the inclusion of the (traditionally male) leadership of armed groups or the previous government.

For example, Nepal’s Interim Constitution established the Constituent Assembly to draft the new constitution ensuring women’s participation. Women must also be included in constitutional bodies that are appointed rather than elected. For example article 200 of The Transitional Constitution of the Republic of South Sudan 2011.

In addition to ensuring women’s participation via formal electoral systems, it will also be important for constitutional bodies to develop gender-sensitive mechanisms for public participation and input in constitution-building. For example, the body may adopt rules of procedure that mandate consultation with women’s organizations or an interim constitutional arrangement might provide for this.

How we ensure that Constitutions include women’s rights?

Most obviously, this requires including provisions that directly guarantee rights related to gender equality and non-discrimination, women’s political participation, and citizenship, employment, and marriage and family life. However, in addition, a wider range of provisions—including in relation to the structure of government, the status of religious and customary law, the status of international law, and institutional mechanisms to enforce the constitution—will also have a very significant impact on the constitution’s capacity to advance gender equality, and need to be considered.

Constitutions can guarantee women’s representation in state structures through a series of provisions, such as general guarantees of equality in political life; quotas for women’s participation; regulation of political parties; and mandating electoral management bodies to ensure respect of these gender-equality requirements. There are a few countries that notably combine all of these requirements e.g., Rwanda, Burundi and Kenya.

The large majority of constitutions contain a provision guaranteeing equality before the law, including on the basis of sex; this kind of provision will be present even when a general equal rights or non-discrimination guarantee is not included in the constitution. Constitutions that only guarantee equality before the law are important, but are ultimately a weak form of protection as they do not mandate positive steps to ameliorate gender inequality.

The best provisions are the ones that reflect both a formal and substantive model of equality: For example, formal equality would require that constitutions do not give women lesser citizenship rights than those granted to men (discussed further below). Substantive equality requires the State to adopt laws, policies, and practices to ensure that women enjoy equality in practice, including through addressing the causes of historically-embedded discrimination that prevent the achievement of substantive equality between men and women.

Another key issue for the constitutional protection of women’s human rights is how guarantees of gender equality interact with constitutional provisions that recognize systems of customary or religious law. Constitutions vary greatly in the approach adopted to resolve potential conflicts between these two kinds of guarantees, depending on factors such as whether the constitution is concerned with minority or majority culture and religion.

The latter kind of provision can be found in Section 39 of the Constitution of the Republic of South Africa 1996, as amended to 2009, which states that “(2) When interpreting any legislation, and when developing the common law or customary law, every court, tribunal or forum must promote the spirit, purport and objects of the Bill of Rights. (3) The Bill of Rights does not deny the existence of any other rights or freedoms that are recognized or conferred by common law, customary law or legislation, to the extent that they are consistent with the Bill.”

3. Implementation of the Constitutions

The provisions in a new constitution may remain paper rights for women unless real efforts are made to operationally them.

An important focus of UN Women’s work on constitutions and legal reform entails supporting national partners to integrate gender equality principles. We also help foster consensus around implementing reforms so that they become a lived reality for women.

The database was conceived to build comprehensive expertise and a strong knowledge on gender and constitutions. This database is different from existing Constitutional database and in fact unique.

Let me go through a practical presentation so all of us can we can use it.