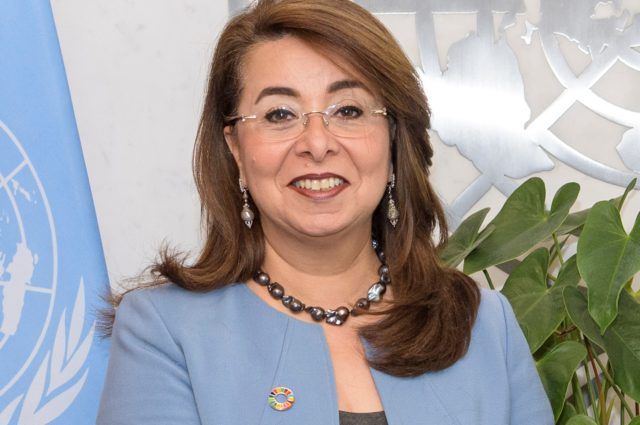 As the world eagerly awaits a solution for the COVID-19 pandemic, a solution to another global health crisis is still being sought after decades. Drug abuse and illicit trafficking have persisted through history as a humanitarian crisis, leading to the deteriorating health and untimely deaths of millions around the world. Beyond reducing the security of global health, drug abuse and illicit trafficking cripple economies and the economic power of users, in addition to exposing vulnerable populations to even greater risks.

The 2020 United Nations Office on Drugs and Crime (UNODC) World Drug Report notes the use of illicit drugs has increased by 30% since 2009. Likewise, the production and trafficking of illicit drugs, such as heroin and synthetic drugs, are at record highs.

To raise awareness of this crisis and the continued battle against it, WPL is joined by Ghada Waly, Executive Director of the United Nations Office on Drugs and Crime and Director General of the United Nations Office at Vienna. During the interview, Ghada Waly discusses the dynamic dimensions of this global health crisis, and proposes avenues and collective solutions to reduce drug abuse and illicit trafficking worldwide.

“Poverty and social marginalization are among the major risk factors for substance abuse. To address this, we need to develop human rights-based and stigma-free prevention and treatment services as well as interventions that reduce poverty and inequalities and promote social inclusion,” says Ms. Waly.

In this call for action, Ghada Waly recognises the influence systemic factors can have not only in exacerbating the crisis, but also in forming effective solutions. Understanding the complexity of, “how young people, women, the poor and marginalized groups are affected by drugs,” remarks Ms. Waly, strengthens the effectiveness of response through prevention campaigns and services that specifically help these most vulnerable populations.

The importance of improving the understanding of this relationship is highlighted by the United Nations’ theme for the International Day Against Drug Abuse and Illicit Drug Trafficking, ‘Better Knowledge for Better Care’, observed on June 26, 2020.

Becoming advocates for change: Engaging young people in the fight against drug abuse and illicit trafficking

Youth must be engaged in the process of designing and implementing solutions to prevent drug abuse and illicit trafficking. Such engagement must be sought in both grassroots and policy-based solutions. Ghada Waly notes the collective efforts the UNODC has implemented to engage youth in these solutions through the Youth Initiative, first facilitated in 2014. This initiative gathers young people each year in Vienna, in consort with the Commision on Narcotic Drugs, with the goal of identifying avenues for youth to become involved in prevention. The most recent gathering led to UNODC’s publication of a Handbook on Youth Participation in Drug Prevention Work.

“I encourage all policy makers, including parliamentarians, to make use of this resource to make young people a part of the solution,” says Ms. Waly.

Solving a crisis within a crisis

According to Ms. Waly:

“The COVID crisis and economic downturn will only worsen the situation and put more young people at risk of drug abuse, or of getting involved in criminal activities, if we do not act.”

Another fundamental dimension to prevent drug abuse and illicit trafficking is treatment and other services.

“A related priority is to keep treatment and other services going at a time when COVID is putting the world’s health and social systems under immense pressure,” says Ghada Waly.

Access to treatment and other services was already limited before the outbreak of COVID-19. Since then, access has become even more restricted as health systems have shifted focus to the deadly virus. Ghada Waly notes that, apart from the pandemic,

“Only one in eight people with drug use disorders can access the treatment they need.”

Women are disproportionately restricted to accessing necessary care for drug abuse, “One out of three drug users is a woman but women represent only one out of five people in treatment.” UNODC has increased efforts to provide support to health care systems around the world during COVID-19, to maintain access to treatment for drug related diseases such as HIV and Hepatitis C – deadly viruses that, combined, affect nearly 7 million intravenous drug users.

Covid-19 cannot be cured, but its spread and effects can be limited through vaccination. Ghada Waly argues the same perspective is true for drug abuse and illicit trafficking, “Prevention is always better, more efficient and more effective than cure.” To continue to build momentum in global efforts to prevent drug abuse and illicit trafficking, Ghada Way calls for global cooperation and evidenced-based, health-centred responses, which are especially focused on engaging young people.