Why Violence Against Women Should Concern Us All 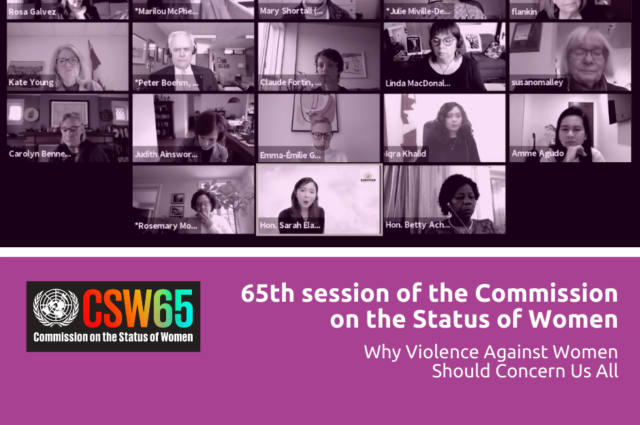 On the 16th of March, 2021, the Canadian Association of Feminist Parliamentarians organised a webinar aligned with the sixty-fifth session of the Commission on the Status of Women. Entitled Why Violence Against Women Should Concern Us All, the webinar convened women leaders to discuss the main causes of violence against women and to seek approaches to the elimination of gender-based violence.

Marilou McPhedran – Member of the Senate of Canada, co-founder of the Canadian Association of Feminist Parliamentarians, and WPL Country Ambassador – initiated the session with remarks on how women carry a disproportionate burden of violence, both in the family and in the workplace. This further indicates the imminent need to address violence against women Parliamentarians.

It comes as no surprise that women face numerous barriers to entering the political sphere. Once they have successfully done so, women suffer continuous political violence from male colleagues, as stated by Rosa Galvez, Member of the Senate of Canada. According to a report by the Interparliamentary Union (IPU), in global terms, 82% of women Parliamentarians have experienced physiological violence, 25% have suffered physical violence, and 20% have been targeted with sexual violence. Despite these alarming figures, fewer than a quarter of parliaments worldwide have a sexual harassment policy in place, according to Lopa Banerjee, Chief of the Civil Society Section of UN Women.

Because women are being prevented from exercising their jobs effectively, institutional violence against women Parliamentarians clearly undermines the very cornerstone of democracy. As observed by Zaruhi Batoyan, Minister of Labour and Social Affairs from Armenia (2019-2020), violence against women should concern us all: “Women Parliamentarians are the ones that support international cooperation and inclusive development. They are the seed of equality, solidarity, and peace.”

Even as the media and societal culture continuously reinforce the misperception that men make better leaders than women, the need for drastic change is increasingly evident. As Ms. Banerjee noted, effective change requires widespread public support for gender equality, as well as a societal culture of acceptance. She further remarked that governments bear the particular responsibility to provide adequate legislation and legal frameworks that recognise and punish acts of violence against women. In the same thread, Sarah Elago, Member of Parliament of the Philippines, emphasised that simply increasing women’s representation in leadership is not enough; we must confront negative perceptions and attitudes against women in political leadership simultaneously.

Panel members also discussed other forms of violence against women, including online violence and cyberbullying, which can be difficult to counter, as abusers may be anonymous. Brainstorming ways to address this issue, panelists spoke of the need to enact legislation to ban certain websites that promote violence against women Parliamentarians. Betty Ogwaro, Member of Parliament of South Sudan, suggested that women Parliamentarians share information on how such problems are being handled in their particular countries and, when possible,  provide coaching to other institutions where women MPs face continuous harassment. The open exchange of personal stories and experiences amongst Parliamentarians worldwide not only serves to publicly denounce the culture of violence but allows women MPs to feel supported and accompanied in this fight.

To conclude the session, Senator McPhedran mentioned how legislators must use “their position and influence to make a change and see the reduction of violence against women Parliamentarians.” In view of the desperate need to change behaviors and attitudes, male allies have an obligation to denounce violence against women in all its manifestations.

As suggested by MP Ogwaro, any act of violence against women is not to be tolerated, and we must fight together to stamp out violence in all its forms.