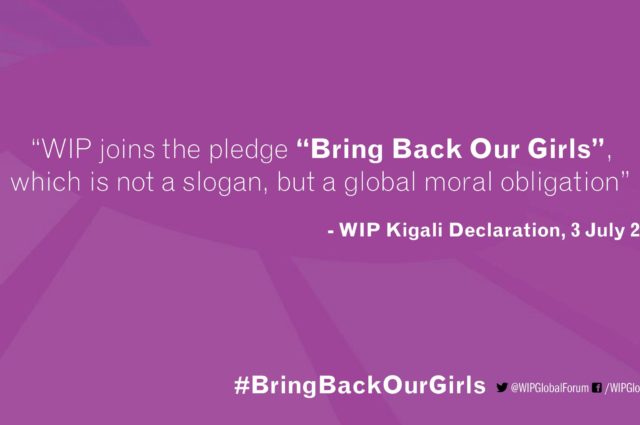 150 days ago (15 April 2014) more than 200 Nigerian school girls were abducted from their school in Chibok by the terrorist group Boko Haram. This terrible crime was mentioned and condemned by the participants of the WIP Summer Summit in Rwanda and is included in the WIP Kigali Declaration.

The Women in Parliaments Global Forum (WIP) is backing the international campaign to release the school girls (#bringbackourgirls). During the last month, WIP has mobilized to call for political action to release the girls. See here the testimonials from female MPs from all over the world. They are encouraged to put forward a Parliamentary question to their Governments in order to set up an engagement at international level.

Members of the WIP Advisory Board have sent official statements calling for political action to release the Nigerian girls:

“In today´s world it is absolutely unacceptable to kidnap girls for what purpose ever. It is our moral obligation as women leaders to do everything to support those who call for political action to release the girls. All women of the world thinking in the same way have to unite to bring the girls back.”

“It’s been 150 days since the abduction of 300 girls by Boko Haram. It’s also been 150 days of minimal progress in bringing them home. Again, the international community is failing women and girls exposed to violence and rape in conflict zones. Commitments have been made to protect women, but words alone will not bring back the girls. It is time to act — and ensure that senseless wars are not played out on the bodies of girls and women.”

“Last April over 200 schoolgirls were kidnapped in Nigeria, captured by terrorists who then sold them on as child brides or into prostitution. This dreadful crime doesn’t only affect these girls and their families. It concerns the education and future of millions of young girls who put their lives at risk by going to school. Bring back our girls.
Jóhanna Sigurðardóttir, Former Prime Minister of Iceland

“As a mother and an advocate for girls, I’m appalled and angry at this assault on girls because they were exercising their fundamental right to education. The UN Foundation continues to join the call of United Nations Secretary-General Ban Ki-moon and other UN leaders for the immediate release of the girls. From this terrible act to the attack on Pakistani teenage education advocate Malala Yousafzai in 2012 to the countless other horrors inflicted on girls that never make international headlines, it’s clear what extremists fear: girls with books, pens, and dreams.”

“We must keep demanding action to bring our girls back. We must also press for safe access to education as a cornerstone of efforts to curtail extremism and end harmful practices. Girls’ education undermines discriminatory power relations. It reduces early and child marriages, violence at home, maternal death, and feminized poverty. In short, it is a clear path to gender equality and women’s empowerment.”