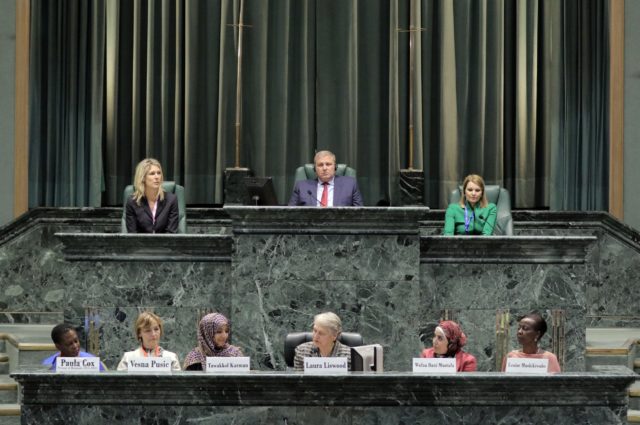 The WIP Global Summit 2016 “Women in Politics: Fast forward” took place in the Parliament of Jordan in Amman, from 4 to 6 May. Over 200 female Parliamentarians gathered to discuss the most pressing issues on the global agenda.

The first session of the meeting “Accelerating Towards Parity in Power – Defining the Power of Parity” sought to discuss the gender gap in politics that still remains in many countries across the world, as well as how to achieve equal participation as a cornerstone of democratic governance.

High-level panellists discussed concrete steps to create a necessary environment to facilitate an equal participation in politics and increase the influence of women currently in parliaments.

Laura Liswood, Secretary General of the Council of Women World Leaders and Member of the WIP Advisory Board, highlighted statistics surrounding the gender gap in different areas of society (education, economy, politics and health). She stressed that narrowing the gender gap in politics is key for political empowerment.

Women bring an essential perspective and different values to the table, which must be reflected in the decision making process, stated Wafaa Bani Mustafa, Member of the House of Representatives of Jordan. She also highlighted the importance of gender parity, especially in the Middle East and North Africa (MENA) region, and the need for the region to act fast on closing the gender gap in politics. She stated that “if we do not act fast, the world will not wait for us”.

Louise Mushikiwabo, Minister of Foreign Affairs and Cooperation in Rwanda, highlighted the need for the politics of “fairness” and that fairness can only be achieved if all citizens participate in the political process. Rwanda’s majority-female parliament (64%) is considered an example for other countries on women’s participation in public life. The Minister stated that women and men must both be present in building and rebuilding society.

The need for better access to education and health for girls and women was also discussed during this first session of the WIP Global Summit 2016. Vesna Pusic, Deputy Speaker of the Croatian Parliament, stated that the barriers to access in these two key areas for poor women also affects their abilities to reach their full potential – especially to enter the political process. She underlined that all change starts on the local level, and that this is also the level where the empowerment of women in politics must begin.

Paula Cox, former Premier of Bermuda, called for a “she-revolution” which must analyse all structures and policies in society, and change any and all which we now deem to be unfair or discriminatory. Cox said that this is the only way to empower women politically.

As a conclusion, Tawakkol Karman, Nobel Peace Prize Laureate in 2011, emphasised the need for parity in power to become the norm, and the fact that this can only be achieved through equal opportunity for both men and women.